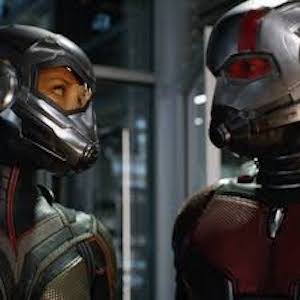 Hands up everyone who thought the MCU would have to start wrapping up after Avengers: Endgame.. Yes, me too. But it just goes to show that there is still plenty of mileage to be wrung out of all the original characters as well bringing out new ones! In fact, Ant-Man and the Wasp: Quantumania is to be the opening film of MCU’s Phase Five; the middle phase of the Multiverse Saga.


Who are Ant-Man and the Wasp and what is Quantumania?

Scott Lang/Ant-Man (Paul Rudd) and Hope van Dyne/The Wasp (Evangeline Lilly) have both had their own origin films; Ant-Man and Ant-Man and The Wasp. They have also appeared in some of the Avengers’ outings too. The relative unknown is Quantumania. I say ‘relative’ because the Quantum Realm was mentioned in both of the aforementioned origins and was pivotal in Avengers: Endgame.

Basically, the Quantum Realm is where you end up when you shrink to sub-atomic size. It was hinted at not being a very nice place so I think there should be bad guys galore when they get there!

Peyton Reed returns to direct his third Ant-Man feature. Jeff Loveness is making his debut as a film writer. Whether Paul Rudd will end up with another writer credit remains to be seen!

In April 2022  Ant-Man and the Wasp: Quantumania was scheduled for release on 17th February 2023. At one point it had a 28th July 2023 release so don’t count on the February release sticking.

Paul Rudd and Evangeline Lilly return as the title characters. Michael Douglas and Michelle Pfeiffer are back as Hank Pym and Janet van Dyne. Kathryn Newton is the third incarnation of Cassie Lang. Bill Murray is playing an, as yet, undisclosed villain.

Characters, So Far, In Ant-Man and the Wasp: Quantumania

As well as the characters we’ve met in the previous outings there are a couple of new faces. Jonathan Majors will be appearing as Kang the Conqueror; a variation of this character was seen in season one of Loki. Also MODOK, a mutated and cybernetically enhanced chap with an oversized head, will be appearing.

Ant-Man and the Wasp: Quantumania Backstory

The four main characters shrink to being so small that they drop into the Quantum Realm. While there they encounter all manner of strange and nasty things. All you need to know before going in is that they can shrink and there is something to see when you get that small.

Will there be another film outing for Ant-Man and/or The Wasp? There’s nothing mentioned in the outlines for the rest of Phase Five. Phase Six is looking pretty thin at the moment but one of the offerings mentions the baddie from this film so we may see Ant-Man in Avengers:The Kang Dynasty on 2nd May 2025!

chevron_left Is there anything extra during the end credits of Gigi & Nate?
Movie Review – Barbarian chevron_right