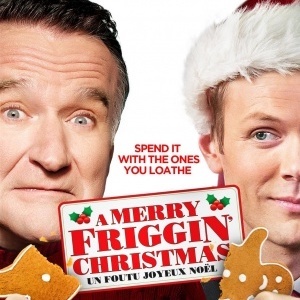 Let me get this off my chest: A Merry Friggin Christmas is a terrible movie. It’s even worse to compute, knowing the absolute talent behind it. Here’s my experience: after a first watch — then re-watch immediately again — of Dan Harmon’s cult classic Community, I wanted more of the same humor, heart, and homage.

So I looked at movies I could stream starring Community ‘straight man’ Joel McHale. On Pluto TV I found A Merry Friggin Christmas, which also starred Robin Williams and Candice Bergen. Wow! Now we are A-listing!

Also involved are other greats connected with Community, like the writer/showrunner team the Russo Brothers, Tristram Shapeero as director, and Swedish composer Ludwig Göransson. How could such talent make something else so relentlessly difficult to watch? It’s cringe-humor stuff, all of it, if you like that type of humor.

Joel McHale is almost completely hindered by the character writing here, which does him no favors. A little bit of his role as Jeff Winger shines through, but only the “I’m irritated at these shenanigans” part.

And there are shenanigans galore, but nothing exciting. There are so many better holiday films featuring crazy Christmas situations, a rush against a ticking clock, drunken Santas, and supremely dysfunctional families. I’d even recommend Chevy Chase’s (another Community alum) in National Lampoon’s Christmas Vacation instead. And I didn’t even like Christmas Vacation. There’s a funny bit about Bea Arthur and the Golden Girls, but that was my only genuine smile.

And Robin Williams is not good here. He plays against type, but it doesn’t sit well on him. Knowing this was around the worst of his depressive period shows. RIP, esteemed treasure.

But what’s A Merry Friggin Christmas about?

There isn’t a plot, really, beyond: “Must get Christmas MacGuffin by any means possible by morning.”

I only finished watching this film for you. I told myself that at the very least I could review the movie for the Christmas Movie Hub here on RunPee.com.

Well, that’s all I did get out of it. And here you are…

FUN FACT: I didn’t remember that I actually saw and reviewed this movie previously on RunPee.com. I honestly remembered nothing; that’s how good it was. I had more to say about Robin Williams in that 2018 review because I think it was among his last projects. It seems A Merry Friggin Christmas improved a bit since my last viewing: I gave it a D- before. Small yay?

There is an onscreen dedication to Williams before the credits.

chevron_left RunPee Weekly Newsletter #103 (March 2nd, 2022)
Is there anything extra during the end credits of The Batman? chevron_right