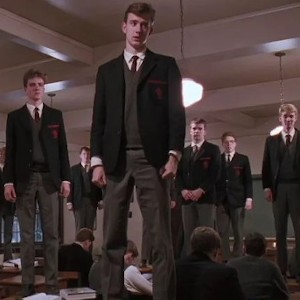 There’s a reason good movies about authors aren’t common; while their creations can be an awe-inspiring journey into fantastical lands or a hard look into fictitious or non-fictitious pasts, the process itself lacks the excitement big screen productions need to succeed. The anger and frustration of producing written works is internalised and difficult to express, often personal to the writer themselves and even more commonly, unrelated to the books they produce.

But while this leaves a rather small pool of films to draw from, it also means there’s little to dig through to separate those hearty stories from the chaff so many genres suffer from, allowing us to compile the 10 Movies About Authors That Will Inspire You To Write below. Enjoy!

With no better place to start, Reprise showcases the hopes, dreams and struggles of two men in their early twenties with lofty aspirations as they traverse the rocky road to becoming acclaimed authors worldwide.

Nothing stings more than rejection, as Emma Roberts from this mid-noughties flick would tell you. Adult World follows a young poet stalking her favourite washed-up writer for mentorship, only to receive a harsher and much more meaningful lesson from his rejection.

Based on the life of New Zealand born Jane Frame, An Angel At My Table is a delight for readers and film lovers alike. With beautiful execution and dedicated to human ingenuity and creativity, you’ll be spellbound from start to finish.

Being a female writer in the nineteenth century wasn’t easy, but that didn’t stop George Sand, who left her husband and children to move to Paris, wear trousers and smoke cigars with the best of them. Impromptu is a candid and witty depiction of the life this revolutionary novelist chose to lead in a time women usually did as they were told.

Impromptu is a humorous depiction of Jane Sand’s life that makes you want to learn more of her work.

If you like romance, then this fictitious, tragic depiction of Shakespeare’s writing of Romeo and Juliet, perhaps the most famous tragedy in written history, is one for you. While Shakespeare in Love is not historically accurate, it is an emotionally potent work of art on screen worth seeing.

A frighteningly deep look into the power of writing on human minds, Misery follows an author’s decision to change his demographic, a meeting with a fan of his current work and the events following an accident that become ever more frightening as their interactions unfold.

Words have power and meaning to all of us, but for some, the effect is most profound. This is one of the times it got weird.

More focused on teaching, Dead Poets Society is a dissection of growing up, the effect literature has on an individual throughout the hardships and stress that comes with age, and how poetry can bring about a better understanding of oneself in troubling times.

Historically important and set in the Civil Rights Movement in 1963, The Help is an emotional and unfiltered insight into the racism so deeply ingrained in American people of the time, of the hardships faced by black communities and the power of journalism to change lives.

An old film, but a great of the once Noir style, In A Lonely Place is an intentionally dry look into the life of an author accused of murder, of how his life changes in lieu of being arrested and the deplorabibly demoralising process of writing works for Hollywood production.

Separated by decades but kindred in spirit, Julie and Julia follows women of the same names as they embark on their culinary dreams; one the inception, creation and sale of a cookery book, the other an attempt to recreate those same recipes over a year and post the results to a blog. A look into how the pursuit of writing has changed with time, but its effects remain the same.

Lauren Groff is a professional writer at Lia Help and Big Assignments services. She reviews movies online. Also, she is a tutor at Best Essay Services.

chevron_left Sundance Film Festival Movie Review – One for the Road
Bidet: the height of civilization chevron_right