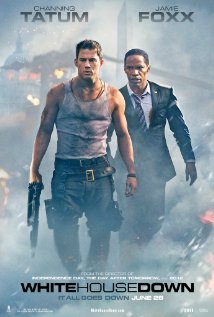 I’m a little surprised by how much I enjoyed this movie. I was wasn’t expecting much but I got a fun, action packed, thrill out of it. The film is directed by Roland Emmerich – Independence Day, The Day After Tomorrow, Godzilla, 2012. Lets face it, none of those movies were great but if you like any of his films I’ll bet you like all of them, just a little. He’s very good at putting together fast paced stories with a good blend of action, special effects and dialog.

Channing Tatum and Jamie Foxx seemed like they genuinely enjoyed working together. That’s crucial for any movie like this. There was a good blend of drama and light humor. Nothing that was hilarious but definitely things to chuckle at every so often.


In grading this movie I’m only comparing it to other movies in its genre. Some of the best movies in this genre, IMHO, are movies like *Die Hard*, *Bourne Identity*, and *The Rock*. I would give all of those the highest marks. And of course the closest comparison would certainly be *Olympus Has Fallen*, which I gave a B+. Using those as benchmarks I’d say WHD was almost as good as *Olympus Has Fallen* so I’ll give it a B.

I should add that it was a real chore putting together the peetimes. Emmerich is a fan of quick short scenes spliced together. I’ll give them high marks on editing this movie into something very tight but it does make my job quite hard. We really like to find peetimes that span over long scenes, but there weren’t any in this movie. The peetimes here have between 5-8 scenes.