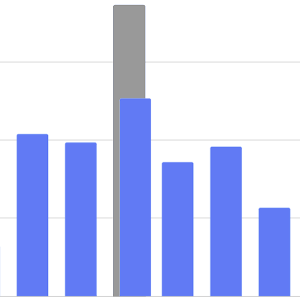 What month of the year has the best movies? I queried the RunPee database for the Peeple’s Poll results and grouped them by month to find out. As you can see in the image above, the result is May… Sort of. The reason May has two bars associated with it is that the taller—gray—bar includes Avernger’s: Endgame, whereas the shorter—purple—bar excludes the results from that movie because it so single-handedly skews the results. When Endgame is excluded then the overall best month for movies is December.

The RunPee app has a built-in Timer that will vibrate your phone 30 seconds before each “Peetime” in the movie. That means we can ask “peeple” what their expectation for a movie is before they see the movie and then when the movie is over we ask for their after-movie rating.

And then there’s the crazy dip in October. My SQL skills were not up to the task of figuring out what caused the October crash. Was it one or two movies, or a large group of movies that disappointed? My guess is, like Avengers: Endgame skews the results for May, there’s likely a movie in October that really disappointed a lot of users. Let’s see, what DCU movies have come out in October? That’s a good place to start. 🙂

Why Terrible Movies Always Come Out In February

chevron_left Is there anything extra during the end credits of Father Stu?
Looking for a WordPress Master chevron_right