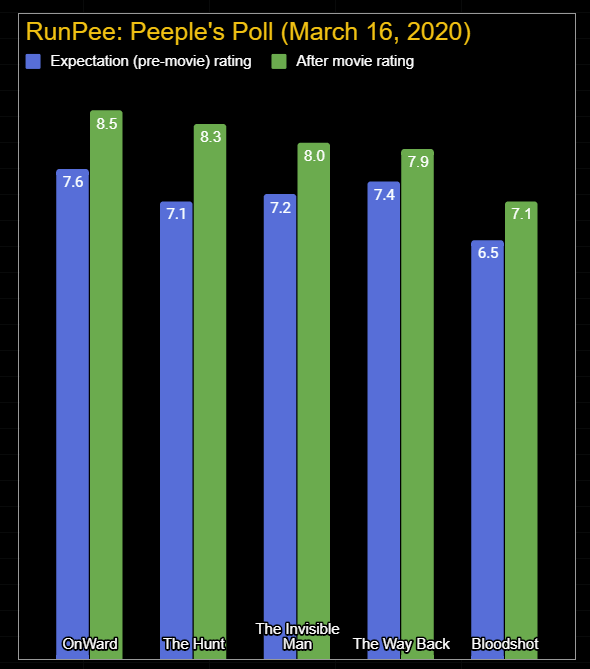 This may be the last Peeple’s Poll for some time to come. Assuming the theaters are open at all there won’t be any new movies coming out. Everything has been pushed back — more on that in a later post.

My Spy, starring Dave Bautista, was supposed to come out this week, but it moved back to April 17th. Time will tell if it can hold on to that release date. (Washing hands and crossing fingers.)


The surprising new hit this week was The Hunt, starring Betty Gilpin, Hilary Swank, Ike Barinholtz. Most importantly, The Hunt is written by Nick Cuse, Damon Lindelof, both of whom teamed up on the TV show The Leftovers, and HBO’s The Watchmen. Going into the movie peeple gave The Hunt a 7.1 Expectation-rating — which is slightly underwhelming. But, the After-movie-rating jumped up to an 8.3. That’s a huge margin of improvement. The average margin of improvement for a movie from Expectation-rating to After-movie-rating is only 0.53. The Hunt more than doubled that.

RunPee Sis did the Peetimes for The Hunt and loved it. She gave The Hunt an A in her movie review. I’m definitely going to watch it on DVD.

The only other noteworthy movie this week was Bloodshot. I felt generous and gave Bloodshot a D+ in my review. It scored slightly higher in the Peeples Poll. It received a very low 6.5 Expectation-rating and a 7.1 After-movie-rating. Bad, but at least better than expectation.

Everyone stay safe out there.

chevron_left Is there anything extra during the end credits of Misbehaviour?
Movie release dates and TV show cancellations due to CoVid-19 chevron_right