What are the Rules for Zombieland? 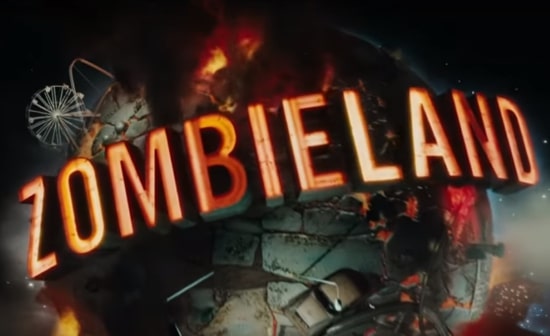 Cardio, don’t be a hero…and CLOWNS? I have to agree with Columbus and Clowns. Sorry. Give me Zombies ANYDAY.

Here are the rules presented on the big screen in 2009’s Zombieland, one of the two greatest Rom-Com-Zom movies ever made.

(Just so you don’t have to guess, the other is Shaun of the Dead.)

With Zombieland 2: Double Tap coming out, RunPee thought a refresher on zombie survival rules was in order. Can you remember more than the first three?

There are 11 officially listed rules, but we don’t know them all from the first movie — ie, “Check the backseat” is listed onscreen as Rule 31. So this list is incomplete, based on Zombieland 1. Stay tuned, hopefully, for more to come in the sequel!

Here’s we what we learned from the first Zombieland film.

All The Rules to Surviving in Zombieland

Columbus lists this as Rule Number One. Like escaping a bear, you just have to be faster than the other guys. Bonus points if you’re faster than the zombie. Remember, some are slow shuffling undead, and some are superhuman fast, but they are both still zombies. And hungry for you. Stay in shape.

(Also, like Columbus, you might need to circle your car enough times to find your keys. Nobody ever said zombies were smart. Just keep running.)

2. Double Tap
Columbus says, “When in doubt, don’t get stingy with your bullets.” You’ve got unlimited access to sporting and gun shop supplies. Use them. Why trust one head shot when you can have two, or more? Unload the whole damn cartridge if you’re annoyed enough.

And don’t prod the body with your foot to be sure the undead are dead. Don’t be like stupid people in movies. Use your Cardio and get the hell out.

BTW, Double Tap is the name of the Zombieland sequel. So we can’t underline the importance of this rule and neither should you.

3. Beware of Bathrooms
You are at your most vulnerable while sitting on the toilet, so always take extra care.

I learned this early on while watching X-Files…nothing good ever happens in bathrooms, while you’re setting up for a nice bath, or waiting for your bowels to move. This kind of thing has been spoofed in many films, but the song remains the same — just because you have your pants down doesn’t mean you’re safe.

Zombies seem to sneak up on people who are at their most vulnerable, although zombies really just attack with no special circumstances. However, this does not change the fact that toilets are places you want to be careful around. The best way to stay safe is to check each bathroom before you enter, in every cubicle. Also remember: just because it’s not humanly acceptable to crawl under cubical doors, it doesn’t mean the zombies won’t do it.

4. Buckle Up (Canon: this is Rule 31, in-universe)
It doesn’t do to be hyper alert for zombies and clueless to the normal safely hazards of life. Seat belts save lives, especially when the danger level is dialed up to 11.

Columbus’ life is preserved from this rule right in the movie. Tallahassee, though, can’t get any shits about mundane things like seat belts. Good thing Woody Harrelson is a big box office draw. That should keep him safe through the sequel, or even three-quel.

This includes both physical possessions and attachments to people. You never know when you’re going to have to kill your mum (see: Shaun of the Dead).

Zombies can surprise you at any moment, and you’ll need to make a fast get away, more often that you’d think — even from the slow undead. As well as using your well-honed Cardio to outrun the zombie(s), you’ll also need to be light on your feet. That means reducing the weight of objects you’re carrying with you. So instead of a bulky suitcase full of personal mementos, you’d be safer with a smaller amount of luggage, such as a backpack that’s easy to carry and won’t slow you down. Maybe bury your stuff somewhere for later retrieval when things blow over. If, of course, that ever happens.

Your heaviest luggage in Zombieland should be guns, ammo, blunt smashing tools, water, food, and medical supplies. Remember, in an empty world you can get these things almost anywhere.

And, yes, if you can find them, Twinkies last forever.

6. Don’t Be A Hero
Don’t stick your juicy blood-filled neck out for others if you wish to stay alive.

In Zombieland, the big risk is you might get eaten alive by zombies if you’re not always alert.

However, remember there are certain circumstances where this rule could, maybe, be ignored. Perhaps you want to save someone who makes staying alive worth it (because you love them), or you wish to ensure you have a partner to back you up when sleeping/smashing tourist items in tacky gift shops (see Rule 9 — The Buddy System).

Don’t take too much time distracting yourself with the yoga before an actual attack, but in your down time, stretch and limber your body. You never know when you’ll need flexibility to get out of a rough situation. This goes along with the Cardio rule. Fitness is your best offensive weapon.

8. When In Doubt, Always Know Your Way Out
If you’ve seen any action films, you’ll know the importance of knowing backdoors, trapdoors, or even warehouse windows, anything offering an extra escape when you’re surrounded by hordes of hungry undead.

What does this mean? Look around and scope out the place. Prop open spare doors. Know your exits. Don’t go inside if  you don’t know at least a couple of ways out. Even Shaun got trapped in the Winchester Pub in Shaun of the Dead, even though he’d been there hundreds of times. Don’t let this be you. Indoors, outdoors…nowhere is safe. Your brain is your best defensive weapon (and apparently a tasty zombie treat). Know the way out.

Are you alone? You might not last long. Sometimes you have to sleep, or cook, or poop (see Bathroom Rule), or maybe even have sexy times. Someone has to keep a look-out for you, and you for them.

It’s not altruism. It’s just smart. Humans are social creatures. Zombies are not.

Ever see ANY movie, ever? The supposed hero gets into their car and…low and behold…in the backseat someone rises up to throttle them. Ugh.

This is just common sense. Check your seats. Always. Duh.

Life in Zombieland is awful. Really. Almost nobody is left alive, and even your loved ones might now be brain sucking monsters. If eating Twinkies, breaking Indian pottery, or riding roller coasters are all you have left to enjoy, make those things happen.

In fact, life in Real-land can be tough. It only makes sense to enjoy the little things, no matter what. What things make you happy, even for a moment? Do them. This is a lesson Zombieland can teach us all.

Zombieland 2: Double Tap will be live soon. Let’s assume there will be more rules coming down the pike. I look forward to more dystopian life lessons. Got any guesses about survival tactics in a world gone nuts? Comment section is down below.

4 thoughts on “What are the Rules for Zombieland?”