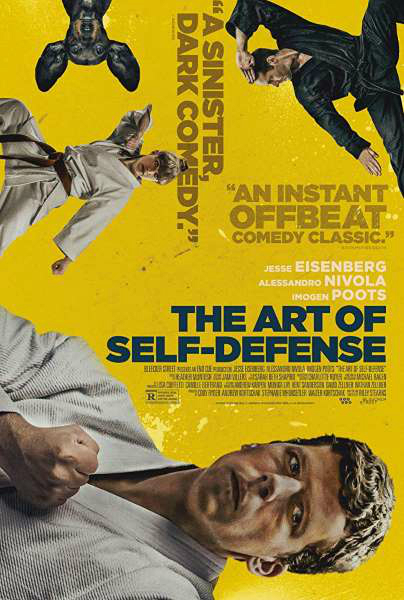 The Art of Self Defense blew me away. These are my favorite moments in the RunPee Universe. When RunPee Dan asked me to do this movie, I thought to myself, “Great; he’s punishing me for something.” Well ha ha, jokes on you, big brother. Little sister loved it.

The story itself was so well told that I never got bored, and was seriously surprised on a few of the scenes. I didn’t see that coming; it hits like a freight train right to the throat. Or like a punch from the foot. I’m dying right now. When you see the movie, you’ll get how funny it felt.

Back to the Art of Self Defense review:

The story has a terrific message. It’s something I feel every man, woman or child should see that’s ever been subjected to bullying. (Not like a small child though, because there is full frontal nudity of the male type.)

There is hope in all situations — it comes down to how you you see things and react to them. Do you roll over and take it, or do you stand up and foot-punch the world? In every one of us there is the power to achieve what needs to be achieved.

There is a particular line from the movie that Jessie’s character says, it goes a little something like this…

“I want to be what intimidates me.”

Pause, let it sink in. Wow, that’s a powerful line. It stopped me in my tracks; I wrote it down to ponder later. He spoke that line in such a way that the impact is still felt. It’s forever embedded into my brain — way to go, Eisenberg.

Jessie Eisenberg was a perfect choice for this role. I can’t think of one other actor that could have done it better. His timing and delivery was magical. Alessandro Nivola, who plays the Sensei, was evenly matched with Jessie. Those two worked together like peanut butter and jelly. Their chemistry was simply delicious.

So in summary for The Art of Self Defense:

This dark and somewhat creepy movie ends up being one of the feel-good movies of the year in my book. I loved it and would love to recommend it to you.

Please leave me some comments; I’m super curious to see what other people think of it.

Just to kind of back my love for this film, I watched it with two other movie reviewers. These guys were hard-core, who write for major publications. They both back it too. So you have three reviewers from different walks of life saying the same thing. See it — you won’t walk out disappointed. Thanks for reading, folks.

About The Peetimes: I recommend the 1st Peetime; there was humor that you’ll miss, but it was easy to summarize. The 2nd Peetime is great, but beware of running over the time on that one. A big reveal happens directly following that Peetime.

There are extra scenes during, or after, the end credits of The Art of Self-Defense. (What we mean by Anything Extra.)

Warning – Avengers Endgame is not going to be Peetime friendly