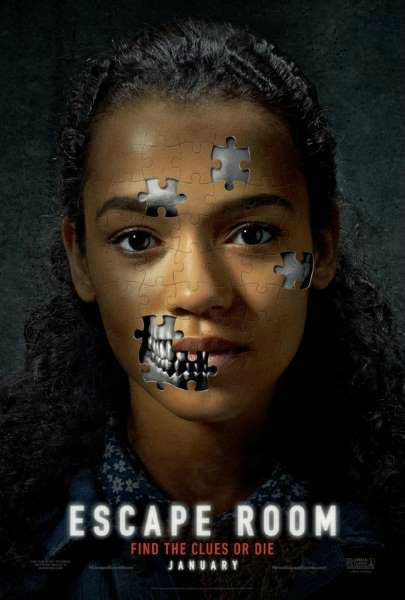 Escape Room is one of those simple little movies that caught me by surprise. I didn’t see any trailers for it, and it looked like a low-grade horror film from the poster. Not the genre I tend to enjoy; I didn’t have any expectations going in.

Now I want to shout to everyone: SEE THIS FILM!

So. What I got was a tight little story that grabbed me by the nads from the first minute, and never them let go until the credits rolled. You grew to really care about each character. As each room got weirder and stranger, and more dangerous, the characters revealed their pasts and fears. We saw them learn to work as a team, and care when they each succumbed to their desperate situations.

The Clues in Escape Room Worked

Also, each room was more cool and bizarre than the last. Kudos to the writers and directors, making this story more gripping and exciting by the minute. I didn’t want to tear my eyes away to write down Peetimes, because I wanted to figure out each clue on my own. It was all there, if you paid enough attention. Unlike some films, it didn’t cheat.

Now I want to do a real escape room, and pick out my smartest five friends to help me get out. It takes a tribe, you know. Everyone has different skill sets.

Really, I haven’t been this surprised by a movie since A Quiet Place. And if my observations of the rest of the audience applies, everyone else was captivated too. When the little cliffhanger happened at the end, everyone filed out looking shell shocked, grumbling about how they needed to wait for the next film to discern the “real plot”.

I’m here to tell you the “plot” doesn’t matter. Sometimes rich people are bored and miserable…and that isn’t the point. The real narrative is about how this smart ensemble of random men and women learned to work together, suffer together, and sacrifice themselves in the cause of the greater good.

And that’s really all I can say without spoiling the narrative. Go and enjoy. I think professional escape rooms will make a “killing” from this one. I know I’m going to do one soon.

About The Peetimes: I highly recommend the 1st Peetime, because it’s the least intense “scenario” in the film. Escape Room is super exciting, so all I could get was 2 Peetimes. Either will do, but don’t try leaving at any other point, or you’ll be LOST. Really.

UPDATE: I just added an Alert Peetime to warn off anyone who gets seizures from intense flashing lights.

There are no extra scenes during, or after, the end credits of Escape Room. (What we mean by Anything Extra.)

Movie Review – Us – Tons of Symbolism, Creepy, and a Great Time at the Movies