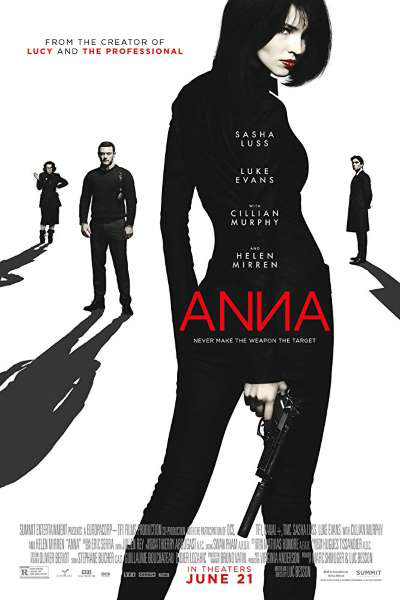 It appears that Luc Besson has fallen into the trap that has been the downfall of many a director; if it worked before, they’ll do it again, and oftentimes the end result is a disaster.

Anna is not a disaster of a movie: the pacing was well done; but the writing, acting, and directing was a disappointment. Helen Mirren’s role as a Russian spy was almost comically performed by this award-winning actor. Nothing about the character was believable, and the Russian accent sounded like a parody of itself. The rest of the cast also gave sub-par performances; however none of them would be considered ‘award winning’ actors, so I didn’t hold them to the same standards I’d set for Ms. Mirren.

A few minutes into the movie I realized I’d seen this before, except with the title “La Femme Nikita”, another spy movie, written by Luc Besson. Oh, and the movie Point of No Return, the American version starring Bridget Fonda, was also written by Besson. La Femme was an extraordinary movie, Point of No Return was acceptable…but Anna fell short.

The biggest problem I had with Anna were the flashbacks, and flash forwards. It was a bit like a Christopher Nolan movie, where time is not linear — a bit irritating, and sometimes, a bit confusing. Also, the incredulous fight scenes (of which there are many) where Anna kicks the butts of a gang of nefarious men wearing outfits straight out of Victoria’s Secret (with stilettos) was way over the top. Each fight scene looked more like something out of a Stephen Seagal movie.

I didn’t hate Anna, but my recommendation is to wait for the DVD.

About The Peetimes: This was a hard action movie with only a few breaks from the chaos, making it just a little difficult to get good Peetimes. I was able to include an Emergency Peetime coming near the end of the movie.

There are no extra scenes during, or after, the end credits of Anna. (What we mean by Anything Extra.)