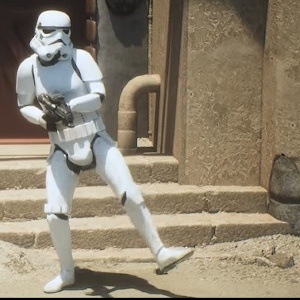 Some of the most entertaining Star Wars content comes from individuals making hilarious shorts. The four shorts below were all created by a group named /AFK and all of the footage is created entirely in Unreal Engine 5. Meaning, really high quality. The sound effects and voice work are movie quality. These videos are so good I’ve watched them each a few times.

A group of snowtoopers inside an ATAT endure the long journey to echo base. As Jean-Paul Sartre said, ‘Hell is other people…”
(8m 7s runtime)

A new recruit discovers that the Imperial Academy might not have been entirely truthful about the realities of war.
(5m 33s runtime)

A pair of Troopers waiting to deploy discuss who has the better lot in life.
(5m 35s runtime)

That’s it for now. I hope they make more. Which was your favorite?