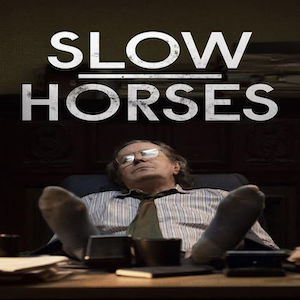 Slow Horses debuted in April 2022 and I thought it was fantastic! Masses of talent, gripping story, suspense, humour…for me, it had it all. I guessed there’d be a second series but I was surprised that it was going to be in the same calendar year! Obviously a lot of other people must have thought the same as I did.

Who Are The Slow Horses?

Slow Horses is the nickname given to failed and failing spies. They know too much to be put back into the real world but not enough to be of use to the security services. They have all disgraced themselves in some way to get relegated there. Perhaps they messed up an operation so badly that they can’t be trusted anymore. Sometimes they got in the way of an ambitious colleague and had the rug pulled from under them. Maybe they just got too dependent on the bottle. So they get sent to Slough House to pass what’s left of their failed careers.

I’m guessing that it’ll be pretty much the same as before. The second series is being based on Mick Herron’s second book, Dead Lions, and I’m hoping they bring back Morwenna Banks and Will Smith (not that one!) to work on the script.

The new series will drop on Apple TV+ on 2nd December 2022. Probably the first two episodes will be available on that day and the rest will drop on the following Fridays; that’s what usually happens with Apple TV+!

Gary Oldman, Kristin Scott Thomas, Jack Lowden, Saskia Reeves, Rosalind Eleazar, Christopher Chung, Freddie Fox, Chris Reilly, Samuel West, Sophie Okonedo, and Jonathan Pryce will be returning in their previous roles. Sadly, the wonderful Olivia Cooke is unlikely to return. We were only vaguely told about her character, Sidonie Baker, dying but she is probably tied up with House Of The Dragon.

Characters, So Far, In Slow Horses

Jackson Lamb (Oldman) and Diana Taverner (Scott Thomas) are back with the rest of the Slow Horses, the “proper” spies in “The Park”, and all the political figures. Aimee-Ffion Edwards and Kadiff Kirwan will be playing new characters Shirley Dander and Marcus Longridge respectively

This is a new story so I don’t think you’ll need to know more than what I’ve said in the Who Are The Slow Horses section above. This story centres around an old Cold War era spy being found dead on a bus outside Oxford, far from his usual haunts, and Jackson Lamb is convinced that he was murdered.

Yes! The third and fourth series have already been picked up. Whether or not they’ll be based on the next two novels in the Slough House series is yet to be seen. There are a dozen novels and novellas in Mick Herron’s Slough House/Jackson Lamb series…so far! There could be a lot of future outings for the Slow Horses!

chevron_left Is there anything extra during the end credits of Bros?
Movie Review – Smile chevron_right