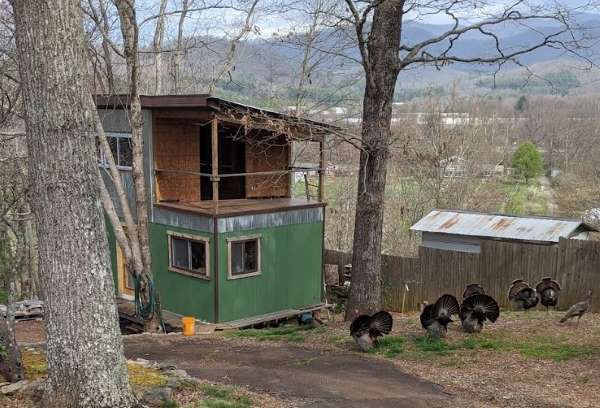 Here at RunPee HQ in Asheville, North Carolina we (Dan, Vera, and RunPee Mom) are all doing well. We don’t have movies to go to so, we only need to leave the house about once every 10 days to refresh supplies. For the most part our daily routine hasn’t changed all that much. Vera and I have always worked from home.

We live in the country and the local supermarket isn’t too badly raided. A few things, like meat, are mostly sold out. Of course we have a good supply of non-perishables to last us, just in case. In case you didn’t know, Vera is native Chinese, and for the past three years we’ve lived half time in China and half time here in NC. (Vera has her green card now and is a permanent resident.) We were aware of the CoVid-19 outbreak back in mid January — Lunar New Years Eve in China.

What is the Chinese Lunar New Year?

If you didn’t know, Lunar New Years is the major holiday in China. It’s sort of like Thanksgiving in the United States, if you had Thanksgiving 14 days in a row. And it’s sort of like Easter, in that it falls over a different date each year. Sometimes it starts in February, sometimes in January. I’ve spent two LNY in China and there’s a family dinner, always at a restaurant, for either lunch or dinner, for about 10 out of the 14 days. Actually, it’s every day, but Vera and I begged our way out of a few of the gatherings.


If you’re wondering, there was never any “exotic” animals to eat. Unless you count duck as exotic. (OMG, duck tastes gross. It’s really greasy.) Most of the meal is pork, chicken, shrimp, fish, or vegetables. Oddly enough, you can’t find turkey meat in China, which is my bird meat of choice. Another oddity, at least from my perspective, is that there is no cheese on anything. A large percentage of Asians are lactose intolerant, so cheese isn’t common.

Much ado about nothing

Vera had to plead with her parents not to go out to dinner on Lunar New Years eve. And especially not to take her grandparents. At the start, it wasn’t much different in China than it was anywhere else in the world. Vera’s family lives near Shanghai, in the province next to Hubei, which was the center of the outbreak. Her parents didn’t think it was a big deal. That changed pretty quickly. Now the tables are turned. China is on the road to recovery, while here in the USA we’re headed for the peak in a few weeks. Vera’s family is anxious about her being here in the USA where things are so much worse than they ever were in China. Plus, news about Asians being attacked in western countries is all over their social media.

If you’re wondering why the number of cases and deaths are so much higher in the USA and Europe than in China, it’s because of two things. First, China isn’t reporting accurately, but some accounting falls through the cracks in every country. Secondly, and more importantly, when China got serious about the outbreak they locked everything down tight. Zero exceptions. There was no such thing as people hanging out in the park playing basketball. For once, the Chinese government’s ubiquitous surveillance and authoritarian enforcement came in handy.

On January 25th Vera and I went grocery shopping to stock up for what was to come. (Also the day that senators from North Carolina and Georgia were briefed on the Covid-19 outbreak, who then downplayed the news while they sold off their stock portfolio — I hope there’s a special place in hell for them.)

We bought reusable n99 masks from Amazon just in time, because they were sold out the next day. (These masks aren’t designed for medical purposes but they’re better than nothing.)

RunPee Mom is 71 and has lupus, along with other medical issues. Our main concern is that we don’t infect her. She lives in a small cottage I built just for her, here on the property, so it’s easy to keep ourselves isolated from her. We still spend time together, but only outside and at a distance. At this time (April 1st) we have only 22 reported cases here in Buncombe County, but that’s up 266% from last week.

Each morning and evening I go down to the cottage and help my mother give her precious maltese Molly a shot of insulin. Molly was diagnosed with diabetes a few months back so this is all new to us.

Don’t worry about the RunPee app’s future. It will survive and as soon as theaters are open again we’ll be back to work adding Peetimes. However, it just barely made a livable wage before. Right now it’s making around $20 a week. It’s likely that after I update the RunPee app to use Google Flutter — something we’re just beginning to learn — we’ll look for job opportunities. We’re very fortunate to have the skills and a background that allows us to pivot fairly easily. As tight as things are right now, we know many others are going through something much more stressful and uncertain. If you’ve thought about changing careers and getting into programming, then please reach out and I’ll try to help however I can.

Sis, who sees all the horror movies, lives in Orlando FL. We are concerned for her because she lives in a much more densely populated area. Her husband is a truck driver, so he has some contact with others. My niece Danielle, who used to do Peetimes occasionally, works in a medical clinic and is obviously exposed to the public as a daily part of her job. They’re doing what they can to limit their exposure, but it’s likely just a matter of time before someone in the house is infected.

Danielle has a 6 year old daughter named Savannah. Savannah has been out of school since spring break a few weeks ago. My sister said her school system did an outstanding job getting the online schooling up and running. Savannah has already finished all of her school assignments for the remainder of the year, so RunPee Sis is teaching her about gardening and biology as much as she can. Funny thing: Savannah used to get up in the morning and watch kids’ shows, but now she turns on CNN. We’ve all tried hard to help Savannah understand what’s going on. She’s handling it well. She doesn’t seem traumatized, but she’s concerned. It’s hard to conceive how this will affect her, but it will probably be the defining moment in her life.

RunPee Mom is trying to come to terms with the fact that she won’t be able to see her great granddaughter until there’s a vaccination for CoVid-19. In fact, we don’t plan on ending Mom’s sequestration until she’s vaccinated. That’s not likely until at least this time next year. Don’t expect to see any Peetimes from her for a good long while. 🙁

On remote assignment: Jill, specializing in sci fi, dystopian and fantasy movies, decided the Oscar Season was a good time to travel and work remotely in Brazil. She’s still there. Why, you ask?

She writes: “1. It’s beautiful, 2. the people are super friendly, 3. there are secret hikes to waterfalls and private coves, 4. the USA is a very scary place right now, and 5. I love it here and might never leave.”

“Stuck” on a tropical island for over a month, Jill has been working remotely at an indoor/outdoor jungle co-working facility in the village of Florianopolis…where wild monkeys watch her work, and the caipirinhas flow every sunset. She doesn’t get to see many movies –although there are theaters — since it’s easier for Dan to see them in Asheville (no Uber needed)…but theaters are shut down worldwide anyway. Jill spends all her time on the RunPee blog now, while living in paradise. [Must be tough.]

Brazil has been operating under lockdown (except for markets, pharmacies, and gas stations) for three weeks, and the amount of CoVid-19 cases are quite low for such a large country — less than 6,000 reported cases at this time. “Most cases are in Sao Paolo and Rio…the Island of “Floripa” is safe enough,” Jill adds. “The embassy said this island is a better place to ride things out than most of the world. And I decontaminate the [BLEEP] out of everything I bring into my flat. This is home for now.”

We consider every RunPee app fan a part of the extended family. We’d love to hear how you’re coping, if you care to share in the comments below.