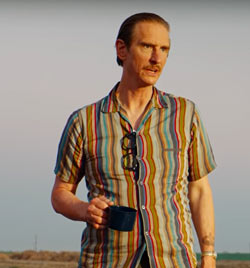 The actor Ray McKinnon plays Phil Remington in Ford v Ferrari — Le Mans ’66 for those on the right side of the Atlantic.

Ray McKinnon may not be a household name — I had to look him up myself — but I recognized him straight away when I saw him because he plays a very similar character in Apollo 13. Which coincidentally enough takes place at roughly the same time period — Ford v Ferrari takes place in 1966-67 and Apollo 13 takes place in 1967-1970.  I guess Ray just has that “I’m an engineer look,” about him — whatever that might be like.

Ray has quite an extensive filmography, including 83 actor credits, from Sons of Anarchy to The X Files.


Check out this interview with Ray discussing his work in Ford v Ferrari.

Read my movie review of Ford v Ferrari (Grade: A+)