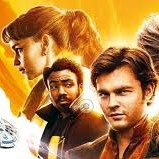 Han Solo is everyone’s favorite space rogue. Star Lord is kind of funnier, and might be almost as cool, but no one can top Han, or — at least — Harrison Ford’s version of him. He still had what it took to make us love Han all the more, in the Star Wars sequel trilogy opener The Force Awakens.

[pullquote]We’ll be seeing soon how well Alden Ehrenreich carries off a younger version of last generation’s most singular and iconic science fantasy movie character.[/pullquote] From all reports, Ford himself has given  Ehrenreich’s Solo: A Star Wars Story rave reviews. And this is a normally taciturn actor here. Ford doesn’t do ‘rave’ anything.

So, here is the new 2.22-minute featurette, “Becoming Solo.” Enjoy, and remember, the Force will be with you, always. Even if you’re a scruffy looking, low-level space criminal with a walking carpet for a co-pilot.


And this “Making Solo” featurette is just a bonus: