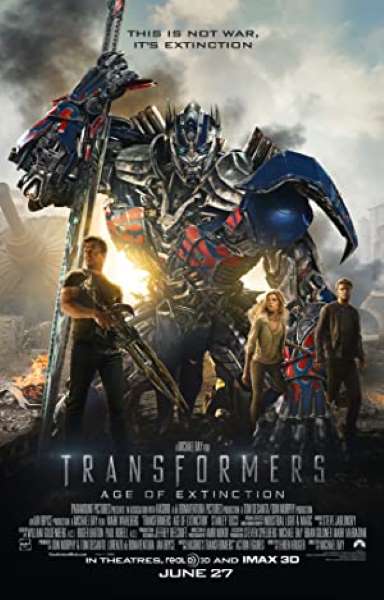 There’s not a lot to say about Transformers: Age of Extinction. (TAOE) It’s a Transformers movie with bits of awesome, a dash of humor, and loads of plot holes. But as we’ve seen before, Transformers can effortlessly jump over plot holes.

When comparing TAOE with the other Transformer movies I’d have to put this one at the top. TAOE can hold it’s own in the awesome moments category (They had me at Dinobots!) while completely trouncing the installments for acting. The cast, specifically Mark Wahlberg and Stanley Tucci, are a huge improvement over the former cast. That right there gives TAOE a leg up.

The other improvement I noticed is the lack of ridiculous attempts at humor. There wasn’t anything like the John Turturro in a jockstrap gag, or the endless puerile humor of Shia LaBeouf in the first movie. Perhaps the more mature and talented cast inspired Michael Bay to make a movie aimed at 20 year old men instead of 12 year old boys.

On the topic of humor I have to say that John Goodman as the voice of Hound was a fantastic choice. His lines alone accounted for 50% of the laughs. Picturing Goodman as a Transformer provided the other 50%. 🙂

About The Peetimes: It’s a LONG movie so there are 5 Peetimes. It’s a long time to wait but I would recommend using the 4rd or 5th Peetime. #1 is a long scene between Tessa and Cade. No Autobots. #2 is good. There’s only a very short scene with Optimus. #3 has a lot going on and the synopsis is pretty long. But there’s no Autobot action. #4 is the longest Peetime. It’s mostly a long search scene. There’s only light action. #5 is best. It’s a bonding scene between two characters that is easy to sum up and has no Transformers.

There are no extra scenes during, or after, the end credits of Transformers Age Of Extinction. (What we mean by Anything Extra.)