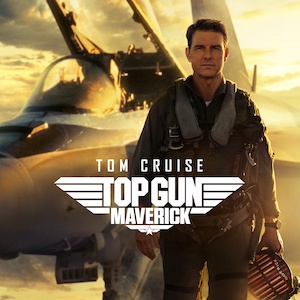 We have a self-imposed rule: each Peep gets to use an A++ grade once per year. There’s no question about it: I’m dropping my A++ bomb on this movie.

I saw this with a friend and we were both blown away by how outstanding every aspect of this movie is. The acting, the story, the drama, the pacing, the characters, the fighter scenes, the humor, the everything was perfect. I can’t think of a single thing they could have done better. This is the paragon of Hollywood blockbuster action movies. Please, more like this.


We rewatched the original Top Gun earlier this week and, let me say, it hasn’t aged as well as Tom Cruise. Definitely, some cringe-worthy moments that may have played will back in the mid 1980s but today… Not so much. But there wasn’t a hint of that in this movie.

The homages to the original Top Gun were really well done and not forced or done just for laughs. Every one of them had a purpose. There was even a subtle homage to Star Wars IV.

If you’re familiar with the Peeple’s Poll in the RunPee app then you probably already know that this movie has an outstanding rating. It’s on target to be one of the top-5 rated movies of the past 3 years. And it’s isn’t just RunPee users who have rated this movie so highly. Over on RottenTomates this movie, as of Friday night, has a 99% rating from the audience and a 97% from critics. And at IMDb.com it has an 8.7 which would land it in the top 15-18 movies of all time.

I wouldn’t bet on him getting it but maybe Tom Cruise needs to be nominated for best actor for his role here. It’s been 22 years since he had a nomination for best actor for the movie Magnolia. I think his performance here is worthy. I don’t think the role was quite as demanding as it was for his character in Magnolia, but there were plenty of dramatic scenes that needed a range of emotions and he made each of them feel real.

Spoilers: click to open only after you've seen the movie.
One thing that a movie like this can rarely pull off is making us believe that the hero of the story may not survive. Going into the climatic mission I really felt anxious that Maverick might not make it. For one thing, he said earlier in the movie that not everyone was going to make it back from this mission.  There was also plenty said about the evolution of air combat and that fighter pilots just weren’t going to be needed in the future.

Also, his character had come full circle with his relationship with Penny Benjamin. It just felt like we might be set up for him to sacrifice himself in the end. We just experienced that with such iconic characters as Bond and Ironman. So I was really prepared for him to die in this movie, but hoping he wouldn’t.

About The Peetimes: There’s no question: this is one of the most difficult movies I’ve done Peetimes for. There’s not a single Peetime that I’d like to recommend. But, that’s the mission, so we do our best. If you can stand to miss the “volleyball homage” from the first movie then the third Peetime is the one I would recommend above the others. The last Peetime is decent. The building tension is the only thing that really happens.

There are no extra scenes during, or after, the end credits of Top Gun: Maverick.

Plot
After more than thirty years of service as one of the Navy’s top aviators, Pete Mitchell is where he belongs, pushing the envelope as a courageous test pilot and dodging the advancement in rank that would ground him.

I Feel The Need…The Need For Top Gun: Maverick

chevron_left Breaking Down Love, Death & Robots episode by episode
Is there anything extra during the end credits of Top Gun: Maverick? chevron_right