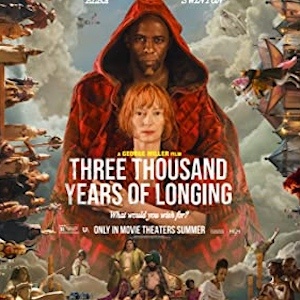 This might be George Millers’ best work. And that’s saying a lot. Of course, it’s not as frenetic as anything from the Mad Max universe, but you can see his fingerprints all over every scene. The cinemaphotography is brilliant. You can see the care and artistry applied to every scene. For example, when we first see Sheba’s face she is unquestionably a beautiful woman, but the lighting applied to her face is pure art.

The writing, also by George Miller, is a paragon of the craft. You can tell that every word, every comma, was deliberate. There was nothing lacking, nor nothing extraneous.

And finally, the acting. This is very nearly a two-person story. In fact, this story would make an amazing play with a cast of only two characters. The casting of Tilda Swinton and Edris Elba is perfect. There really aren’t two actors who could be better in these roles.

The only reason I’m not giving this movie an A+ is that the story doesn’t end with an impact—which I’m glad for. It doesn’t try to be more than it is and swing for the fence, as too many movies attempt, but fall short. It ends comfortably; without disappointment, but also without inspiration. It does however end with admiration for the quality of a wonderfully told story.

About The Peetimes: The first two Peetimes both involve some storytelling, but nothing really crucial that can’t be summarized. None of the Peetimes involve any interaction between Tilda Swinton and Edris Elba. The last Peetime is best. It doesn’t involve any storytelling at all.

There are no extra scenes during, or after, the end credits of Three Thousand Years of Longing.

Plot
A lonely scholar, on a trip to Istanbul, discovers a Djinn who offers her three wishes in exchange for his freedom.

chevron_left I Can’t Be Bothered Thinking, Just Stick This One On
Is there anything extra during the end credits of Three Thousand Years of Longing? chevron_right