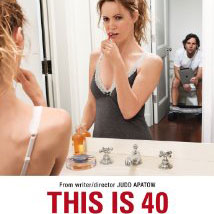 This Is 40 was awesome!! It has made my top ten favorite movies of all time list for sure! I happen to be 39 right now and in a few months will hit the big 40. After seeing this movie I’m totally cool with it. Leslie Mann (Debbie) pulled off such an amazing performance that I think all 39 year old women facing the big 40 would walk away feeling better about themselves. Watching her and Paul Rudd (Pete) on screen together going through the whole marriage thing was so well done that I sometimes forgot I was watching a movie and not home video’s. I know that I’ve gone into the bathroom and have found my husband sitting on the toilet with his iPad. I know he goes in there to escape his life for a while..just like Pete. I also know that only half of what I say he actually listens to..just like Pete. These two may have gone through some bad moments and had some anger issues with each other but they were able to pull it together. In the end the love that they had at first was still there just stronger. That love being made stronger and stronger with each moment of life that they had to deal with in their marriage and the raising of their family.

The supporting cast was top notch. Albert Brooks and John Lithgow as the father’s added a whole other dimension to the movie. They each had their own issue to add which bumped up the already hilarious movie. Then you go and add Megan Fox and Melissa McCarthy as supporting cast and you have even more layers of “Oh my God” funny and helloooo sexy.

I definitely wouldn’t classify this as a chick flick. It’s not all just about the woman in the movie. The guys have their fair share of say so in this too. All in all I would totally recommend this movie to anyone. Married people can relate to it and single people can look at it and decide if that’s the life for them because this movie was dead on right. This is what forty is like.

About The Peetimes: Both pee times work equally well.

There are extra scenes during, or after, the end credits of This Is 40. (What we mean by Anything Extra)