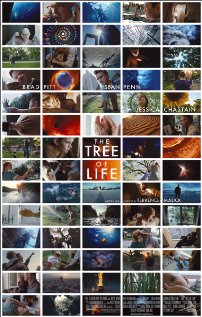 I’m going to do this review as an interview of myself by a person who’s interesting in possibly seeing The Tree of Life.

potential movie goer: So Dan, did you like The Tree of Life?

potential movie goer: What do you mean?

Dan: I have no idea. I can say that it’s about a family: father, mother and 3 boys. The father isn’t an especially good father. The mother is playful and loving. But the story skips around a lot. One minute your in a small town in Texas circa 1960 playing with the boys in the back yard. Then you’re suddenly watching jelly fish swim in the ocean for no apparent reason and then you jump to present day watching the older brother – played by Sean Penn – looking miserable.

potential movie goer: Was the acting any good?

Dan: Absolutely. The acting was great across the board. Brad Pitt plays a great old fashioned dad. And the young boy who plays the older brother is spectacular.

potential movie goer: What was your favorite bit of the movie?

Dan: I loved the visuals throughout the movie. Especially the stuff in the first 30 minutes. The dinosaur scenes were my favorite. They could have done the whole movie on primordial Earth and I think I would have liked it better. But maybe that’s just me. I think when the movie is out I’m going to digitize it and edit out all of the people scenes and just leave all of the visuals of space and primordial earth. I could watch that over and over.

potential movie goer: Would you recommend that someone see this movie?

Dan: That depends. That depends. Who is this someone? If, for instance, this someone is a big fan of movies like 2001 A Space Odyssey, Baraka, and Thin Red Line then yes. You’ll like this movie. But if you’re someone who thinks the pacing of Aliens is a little pedestrian then no. This movie probably isn’t so much your bag.

potential movie goer: Was it hard getting the peetimes?

Dan: Boy was it. Since I had no idea what the movie was about – still don’t – it was hard to tell if one scene or another would be important later. Turns out I don’t think it would really matter when you run pee during this movie. But I did manage to get 3 peetimes. I hope they help. The movie is about 2 hours and 13 minutes long – not including the end credits. So it’s likely you’ll need to pee in there somewhere.