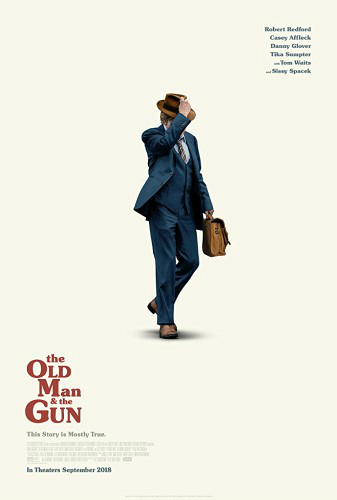 Since The Old Man & The Gun is reported as being Robert Redford’s swan song; it seems only fitting that he reprises his most beloved character. As I sat in the theater, completely captivated by this movie, all I saw was the Sundance Kid, nonchalantly robbing one bank after another. So come on, Oscar committee, let’s honor this amazing actor by sending him off to retirement with one more Oscar for his mantle. And by no means would this be a ‘mercy’ Oscar, TOM&TG is an Oscar-worthy film.

The acting was superb, the directing was excellent, and the pacing was well done. The chemistry between Redford and Sissy Spacek was a beautiful addition to the movie. You could see the  admiration Redford’s character, Forrest, had for Spacek’s character, Jewel. This was the work of a really good actor and director.

Even though this is a ‘based on a true story’ movie, it doesn’t follow the real story exactly, but is still put together in a way that does give us insight into the life of Forrest Tucker.


All in all, I loved this movie. There was very little cussing, very little blood, and no nudity, so take a break this weekend and go see this remarkable film.

About The Peetimes: The Old Man & The Gun is an evenly paced movie, making it easy to get 2 good Peetimes. Both are of equal length, so let your bladder decide which is best for you.

There are no extra scenes during, or after, the end credits of The Old Man & the Gun. (What we mean by Anything Extra.)