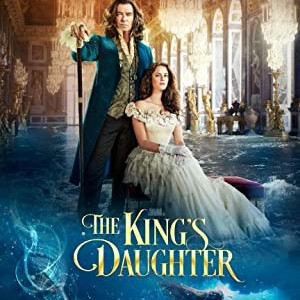 Adorable, charming, lush, great storytelling. I was super surprised at the loving care shown to detail in this little movie. The King’s Daughter was incredibly good-natured. I found myself smiling the whole way through; a rarity. That’s when I realized this might be A+ territory.

Pierce Brosnan (as the Sun King, Louis XIV himself) has never been better. He seems to be riotourously enoying being in the center of something so beautiful and fun. William Hurt is perfection, bringing a necessary twinkle to the eye of a character that could have been painted with the “evil power-hungry clergyman” brush. Brosnan and Hurt can be so amiable together!

Some Quick Notes on The King’s Daughter

If you pay attention there are neat nods to modernity, like most of the humor in wonderful A Knight’s Tale (2001), but less in your face.


The young leads were gorgeous and appropriately endearing. The two had more chemistry than Kiera Knightly and Orlando Bloom in their famous pirate movies…

The movie implies that the Three Musketeers are present, but don’t make a big deal out of it. I liked that. They’re just there, doing their job.

Was cool noticing each of Maria’s palace gowns were mermaid-cut. She also had wavy, long, slightly unruly mermaid hair. Again, not commented on within the story. Just a great way to reflect the theme without being obvious.

A really feel-good, happy film. No one is really evil, except for the doctor (this is not a spoiler. It’s established early on). I understand the desire to do science! But not when one must commit atrocities in that name.

Julie Andrews was a nice voice choice for narration, but I honestly don’t think narration would have been necessary at all in this tight story, much less Lord of the Rings-level exposition.

The little “Fin” before the credits: remarkably clever when you recall that movies used to use that tag instead of The End. Just an extra little smile for you on your way home.

I highly recommend catching The King’s Daughter on the big screen if you can. You’ll swoon at the lavish visuals…and start planning a post-pandemic jaunt to Versailles!

(Based on a book by Vonda N. McIntyre, in case you’re a fan.)

About The Peetimes: I have 2 excellent Peetimes that made my job easy. I’d take the 1st one if you can. BTW: An adorable movie. I smiled the whole time. Was sad it was over…just had to say it.

There are no extra scenes during, or after, the end credits of The King’s Daughter. (What we mean by Anything Extra.)

Plot
King Louis XIV’s quest for immortality leads him to capture and steal a mermaid’s life force, a move that is further complicated by his illegitimate daughter’s discovery of the creature.

chevron_left Is there anything extra during the end credits of The Tiger Rising?
RunPee Weekly Newsletter #99 (February 2nd, 2022) chevron_right