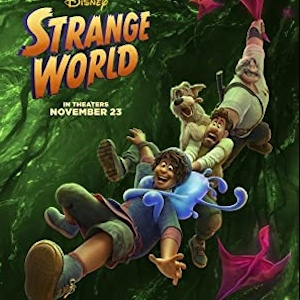 Strange World tries to make a lot of statements, and I think it dilutes all of them in the process. It’s certainly an aesthetically pleasing movie—sort of like an animated Pandora. In fact, I’m sure it gets a lot of inspiration from the world of Avatar.

Another message is the acceptance of multi-racial and homosexual relationships. There are no doubt many reviews out there that warn parents not to take their kids to see this movie based on the fact that homosexual relationships are promoted in this movie. I can say without hesitation that this movie does no such thing. It only portrays two same-sex characters in a budding romance and makes zero commentaries on the subject. Every other character, from peers to grandparents, treats the idea of the relationship as natural and matter-of-fact.


The other message is clearly about environmental concerns but done completely analogous to our climate crisis. There’s no mention of oil, coal, gas etc. This is the big-picture message that is threaded through the entire movie. The one criticism I would offer is that perhaps the father-son-grandson message could have been abandoned to give more thought to the environmental message.

It would have helped if the realization that is made at the end of the movie had more incremental support throughout the movie. Small discoveries about how systems in the Strange World interacted would have made the ending more impactful.

About The Peetimes: I have three good Peetimes. I think the middle one is the best because it’s nice and long and easy to summarize.

There are no extra scenes during, or after, the end credits of Strange World.

Plot
The legendary Clades are a family of explorers whose differences threaten to topple their latest and most crucial mission.

chevron_left RunPee Weekly Newsletter #141 (November 23th , 2022)
Is there anything extra during the end credits of Strange World? chevron_right