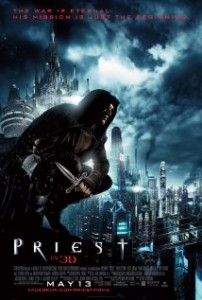 I generally like movies in the Priest genre – whatever that is. Movies like this are rarely great and the best one can hope for is that they don’t suck, that they have a few decent action scenes, maybe throw in something moderately unique here and there, and that the story is believable within the universe that they create.

With that in mind I’d say Priest gets a B rating compared to similar movies.


As far as the acting goes Paul Bettany is rock solid as always. He brings a sense of purpose to his characters that doesn’t seem fake. I think of him as a talented version of Keanu Reeves. Keanu gets – used to get – a lot of roles like this. Think Constantine. He does that dark foreboding thing pretty well but his characters are shallow and understated. Bettany can take the same role and bring a great deal more depth to it. And Bettany can do comedy – A Knight’s Tale, The Tourist -when it’s called for. Not that Priest has much of that.

Speaking of comedy: that’s probably the single thing Priest is really lacking. There are just a few chuckle scenes and none of them involve Bettany which is a shame.

The action in this movie was adequate. We’ve seen so many outstanding action movies in the past that the bar has been set incredibly high. Just adding a few well choreographed scenes is all I’m asking for these days. There was one particular action sequence when the Priest and Priestess were fighting the hive guardian that I hadn’t seen before – kudos. But make no mistake: this is not an action movie. Sure it has a few decent action sequences and ends with a big fight. But it’s really about plot and characters.

The story was just slightly better that I would have expected. The writers based this on a completely different reality/history to our world. That gives them free reign to go in any direction they want. And this movie clearly sets up a potential series of movies. Many times the first movie in an intentional series are pretty lame. They spend too much time setting up the characters and universe. That wasn’t a problem here at all. The hints to the series don’t come until the very end.

2D or 3D: I saw this movie in 2D. For one thing 3D usually gives me a headache and more importantly I have to take notes for the peetimes during the movie and writing with those glasses on is a huge pain. From the scenes I saw in this movie I get the feeling that the 3D version is one of those that is rather gimmicky and only a few decent scenes might translate into 3D. I wouldn’t bother myself. Let me know in the comments if you think I’m mistaken.