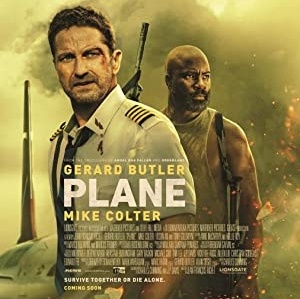 If you are a fan of Gerald Butler, or the action/drama genre then don’t let my C+ grade for this movie discourage you from seeing it. Plane is better than par for the genre of movie this falls into.

Well no. It’s not a true story. But the movie plays out like one. It feels like a dramatization of actual events. It’s gritty and suspenseful, especially the storm sequence. I’m certainly not an expert on the subject of flying a passenger plane but it felt like the most unrealistic thing about the movie is Gerard Butler’s scruffy appearance. (Aren’t male pilots normally clean-shaven as a rule?)


I actually got so wrapped up in the tension that I forgot to start looking for Peetimes early in the movie. Not that there were any to be found anyway.

The passengers made up a good character salad with their diversity. But not much was made of them. The movie does a good balance of creating characters without diving in deeper than needed but at the same time not resting on pure stereotypes.

I especially liked how the prisoner character, Louis Gaspare (Mike Colter), was portrayed. I won’t give anything away other than to say that they resisted giving the character a Hollywood ending. Again, it felt real, like that’s what the character would actually do.

If you want a nice popcorn movie then this probably won’t be disappointing. But at the same time, you won’t be missing anything if you wait for this movie to stream.

About The Peetimes: The 1st Peetime is the best option. If that doesn’t work for you then the 2nd Peetime is decent but has a lot of details in the synopsis. The third (last) Peetime is for emergencies only.

There are no extra scenes during, or after, the end credits of Plane.

Plot
A pilot finds himself caught in a war zone after he’s forced to land his commercial aircraft during a terrible storm.

chevron_left Movie Review – Devotion
Is there anything extra during the end credits of Plane? chevron_right