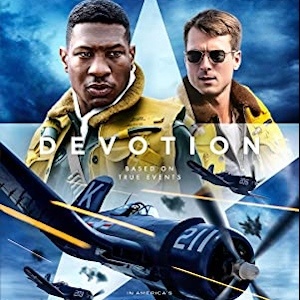 Swift shot: It’s a rare achievement to make a boring war movie, but Devotion found a way. There was no earned payoff from any of the characters, and while it was uplifting and perhaps mostly historically accurate, I felt no emotional connection to these pilots.


Last month I watched All Quiet on the Western Front, and what irked me about it was the lack of training. In Devotion, it’s just the opposite. Over half the movie is focused on the training, which is not interesting enough to warrant that much screen time. Let’s face it, people come to see a war movie, you best give them a war movie. With Devotion, you get something war-adjacent, and there isn’t much to celebrate.

Jonathan Majors plays Jesse Brown, a young man who feels intense pressure to make his mark as the first Black Naval Aviator in U.S. history. Part of VF-32, a fighter squadron based out of Rhode Island in 1950, Jesse keeps to himself and lets his flying do most of his talking. And he is really great . . . in an F8F-1 Bearcat.

But, when command upgrades the squadron to the so-called “Widow Maker” F4U Corsair, he starts to wonder if he can prove his detractors wrong. Jesse lives with many internal demons, and how he chooses to exorcise those doubts and fears was remarkable and perhaps the most real part of his character.

Jesse doesn’t trust many people in the Navy, so when he meets his new wingman, Tom Hudner (Powell), he keeps him at more than a wing’s distance. He doesn’t invite Tom over to meet his wife, Daisy (Jackson) or their young daughter.

And Tom has a real hard time navigating a friendship with Jesse who has a serious chip on his shoulder. I guess you can’t blame him, but it gets pretty annoying at times when it’s clear that Tom is not the enemy. Eventually, Jesse softens and lets Tom in, but if this was the conflict of the movie, it was pretty weak.

I mean, will Tom and Jesse become friends? Give me more, please and thanks!

Anyway, the rest of the guys are mostly indifferent about Jesse being in their squadron. And I do appreciate that they didn’t try to invent conflict where none historically existed. But, Jesse being in the squadron is novel, and some of the guys are a little chagrined . . . I guess. You won’t find out much about the rest of the wing; though, as they are interchangeable to include Tom. I have no idea who he is before, during, or at the end of this movie.

With Jesse, you get a bit of a sense of who he is, but not much depth of character is formed overall. So, when the stakes of these guys going to actual war in Korea finally happens, I don’t have a lot invested in them, other than to realize they actually were these fighter pilots and they had big brass balls. Anyone who lands a plane on a tiny floating runway is a giant amongst men, period.

Incidentally, I liked Thomas Sadoski as their Wing Commander, Dick Cevoli. Cevoli imparts some sage words of wisdom throughout the movie. He’s probably the only stand-out from the rest of the squadron supporting cast.

I feel bad for pointing out all the weak spots in this film, but as I did a little research on Jesse , I found so much more to tell about this pilot than what the film touched on. And in the epilogue, when you find out the fate of Jesse, I turned to my buddy and said, now that is the movie we should have seen . . . not some over-inflated training stuff. When you do a quick search on Jesse Brown, he did a lot more missions than what we are shown in Devotion.

Sadly not many people are talking about this movie . . . which is usually not a good sign, but being a sucker for “World War II” fighter movies and a lover of Corsairs in general, I just had to watch it. My first surprise was that it was set in Korea, not The Big Show. The effects were decent, but you can tell there were realistic budget constraints in that department. I would hold it up against Midway in how the effects were done.

South Florida native, Marine Corps veteran, former choirboy and violinist. He’s seen much of the world and lives for films. Swift created FilmGrouch to counter so-called “experts” who forgot how to enjoy movies. He’s just a regular, red-blooded American who wants to be entertained.

Rick is a supporter of VeteranPpoweredFilms.com and would appreciate it if you checked them out.