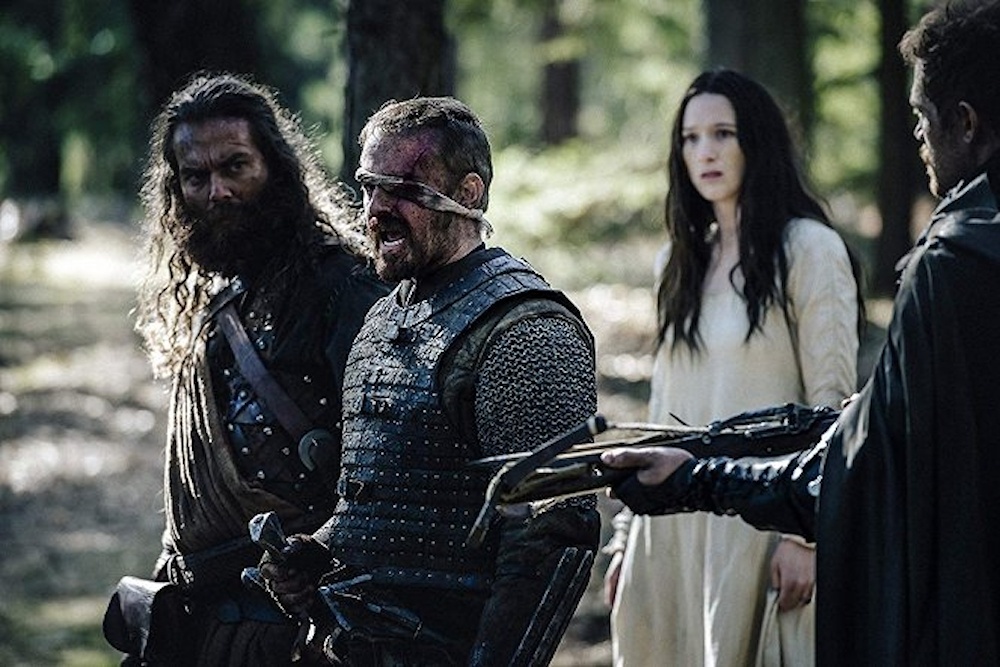 Medieval is a historical action drama that captures part of the life of Jan Žižka (Ben Foster), a Bohemian military leader. When Žižka and his men are hired by Lord Boresh (Michael Caine) to kidnap the niece of the King of France, it sparks bloody battles. Caught between two monarchs and the rebellious forces gathering in the countryside, Žižka must face his mentor Torak (Roland Møller) on the battlefield or watch the kingdom around him crumble.

This movie definitely has its violent and brutal battle scenes. It wasn’t overly gory but they didn’t shy away from things either (Faces bashed in, arms cut off, etc), as war is never pretty, no matter when it is. There was an enjoyable balance of sweeping aerial shots with chaotic and brutal fight sequences. Of course, some political intrigue are the driving forces behind most of the violence. Or just plain tyrannical rule over peasants. Medieval reminds us that the Middle ages weren’t always the best of times to live in for most people. The film also works to mythologize Jan Žižka, (already a historical Czech icon) with both a kind of love story and a personal/political rebirth. Medieval can feel a bit bloated with all these narratives vying for screen time. I’m not entirely certain what I would cut out. As one part over here, helps motivate a part over there.


The level of action and violence might not be everyone’s cup of tea and the little bit of too many things happening at once might be too much for some people as well. So my rating took a little bit of a hit for that. Personally, I had never heard of Jan Žižka so I can’t speak to the historical accuracy or liberties they took. I enjoyed the movie. If you’re a fan of Game of Thrones and/or Braveheart kind of shows/movies. With a bit of storified history, middle-aged-style battle sequences and a splash of political intrigue driving the violence. Then Medieval should be a movie you should go and check out.

Would I rewatch it?
Yes

Would I want to own a copy?
Yes

Must-see in theaters?
To support, sure. This movie does not require the big screen or sound. The story could transfer to the small screen.

About The Peetimes: Medieval is a historical action drama. I did find 3 Peetimes. The 2nd and 3rd are recommended.

There are extra scenes during, or after, the end credits of Medieval.

Plot
The story of fifteenth century Czech icon and warlord Jan Zizka, who defeated armies of the Teutonic Order and the Holy Roman Empire.