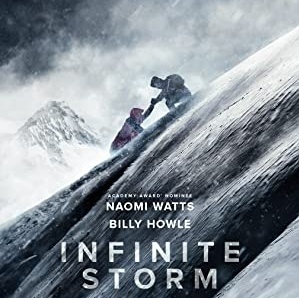 I’m going to keep this review short, because what’s the point of writing a long review for a pointless movie? Plus, I have work to do.

Infinite Storm wasn’t bad by any means. It was just… Pointless. Actually, there was a point, just that it all happened during a three-minute conversation. The rest of the movie was a slog.


The only thing that makes the movie worth watching is Naomi Watts. If you think she’s a fantastic actress then you’re underestimating her, because she’s better than that. As for the rest? Just watch the first hour and fifteen minutes of the movie on fast forward. You won’t miss anything.

For no particular reason, my wife and I rewatched The Proposal about a week ago. This week we had to do Peetimes for two movies, back-to-back: The Lost City and Infinite Storm. At first glance, it looks like these movies have nothing at all to do with each other, besides the fact that they were released on the same weekend. But The Lost City has a small role for the actor Oscar Nuñez who was the jack-of-all-trades character in The Proposal. And in Infinite Storm the actor Denis O’Hare has a tiny role. So tiny his character doesn’t even get a name at IMDb. Coincidentally, Denis O’Hare is also in The Proposal as the immigration officer.

So here are two movies, completely unrelated except that each has a tiny role for actors who had bit-roles in The Proposal that we just happened to watch earlier this week. What a co-inky-dink. 🙂

About The Peetimes: I have two decent Peetimes here. To be honest, once Pam starts hiking up the mountain you can run and pee anytime up to the end of the first Peetime at about 22 minutes into the movie. You won’t miss anything other than the storm getting worse with every passing minute.

There are no extra scenes during, or after, the end credits of Infinite Storm.

Plot
As an experienced climber (Naomi Watts) ascends Mt. Washington, she turns back before she reaches the summit as a huge blizzard approaches. But on her way down, she encounters a lone, stranded man, and takes it upon herself to get them both down the mountain before nightfall arrives and they succumb to the storm. Based on a true story.