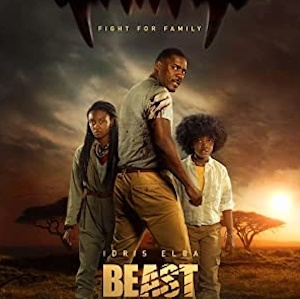 Beast is pretty much a straightforward movie that you would expect from the trailer. Father and daughters visiting a family friend in a South African animal preserve. While traveling through the preserve. A dangerous situation presents itself. Can they survive the beast? Don’t worry it’s not a monster or an alien, it is a rogue, pissed-off, lion. But I would definitely classify this movie as a creature feature. You know, like Jaws.

Jaws has memorable music that helped set up the scenes. Beast has the lion’s sounds. It really helped keep the tension up cuz you could hear it nearby and around you. The lion’s CGI effects are pretty good too. Even though this movie is classified as a horror. I think they did a decent job. Not going over the top with blood and guts or anything like that. They have to show that the lion is dangerous and hurting people. It was nothing worse than your average action movie. I know others are probably going to make comparisons to other lion attack movies. But I will just leave it with… I enjoyed this movie. Didn’t blow my socks off but it was a good time.


Would I rewatch it?
Yes

Would I want to own a copy?
Yes. I think I would add it to my creature feature movies.

Must-see in theaters?
It helps this movie. The sounds of the lion moving around. The bigger screen you can see the lion better in the distance. When it is stalking around. So unless you have a big screen TV and a sound system at home, it might not have the same impact.

About The Peetimes: I found 2 Peetimes. The first one is for emergencies only. I recommend the second Peetime.

There are extra scenes during, or after, the end credits of Beast.

Plot
A father and his two teenage daughters find themselves hunted by a massive rogue lion intent on proving that the Savanna has but one apex predator.

chevron_left RunPee Weekly Newsletter #127 (August 17th, 2022)
Is there anything extra during the end credits of Beast? chevron_right