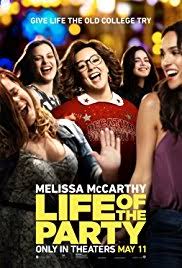 Entertainment News – [pullquote]Melissa McCarthy’s new comedy Life of the Party is banking heavily on nostalgia for bygone college days.[/pullquote] I know the feeling. I’m 50 myself, and miss the my old school days, my long-lost chums, and the sense of being in a contained world where my only worries concern studying, learning, and deciding if I should/shouldn’t attend the next big kegger.

Well, then.  What is the actual audience for Life of The Party? Is it young adults who like fun fluff comedies, and are ready to cringe at the idea of a parent bursting onto their scene? Or people like me, who miss the Old Days? Or, probably, a lot of the audience will be just Melissa McCarthy fans.


The flick is up against Marvel’s juggernaut Avengers: Infinity War, which is breaking records, driving people to the theaters in droves (I myself saw Infinity War five times – yep).  Any other movie on the roster isn’t going to make a splash, so very few films are actually coming out this week. We’re only seeing two, and that is astounding. Normally we’ve got four or five movies to get Peetimes for.

Here’s what McCarthy says about her role in Life of the Party:

What McCarthy has to say in a Mom’s Advice sort of group:

Seriously, you go girl! And maybe I’ll make the priority to go back to school, too. Life’s too short to be a grown-up forever.

Life of the Party Movie Review (Link to be added soon)