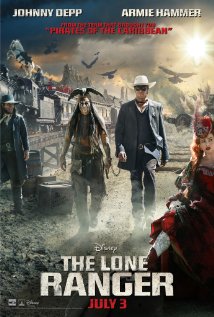 This is a long, bloated film that went for campy, cartoonish thrills. In other words, it was made for kids and while it had moments of beauty, and maybe even moments of genius, it never really transcended its own wax figure of itself.

The Lone Ranger isn’t a bad movie; in fact, it has some of the best shot action scenes of the summer. It simply didn’t reach for the highest version of itself.


Armie Hammer gives a surprisingly heartfelt performance while Johnny Depp mugs his way through the entire movie.  Depp is such a naturally talented actor, I have to think he was forced into this bad performance by lousy dialogue riddled with half jokes.

Helena Bonham Carter plays Red, the sharpest, most intriguing character in the movie with the smallest amount of screen time. Her ivory prosthetic leg that doubles as a rifle had more dramatic and comedic juice than any mask the Lone Ranger could ever wear.

If you go into the theater with very low expectations, you will enjoy the movie.