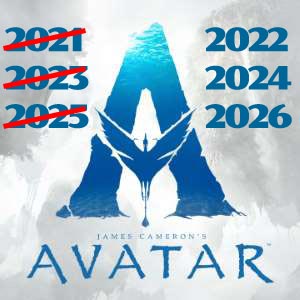 Disney has announced that all scheduled Star Wars and Avatar films between 2021 and 2027 are being pushed back one year. That means there will be no “Avatar 2” in 2021 and no new Star Wars film in 2022.

The plan all along has been for Disney to alternate releasing either a Star Wars or Avatar movie every Christmas season. The new release schedule is:


The live action reimagining of Mulan — which had been repeatedly delayed and was slated for August 21 — has been put on a shelf until there’s some reasonable certainty that a release date can be set and kept. The same goes for Christopher Nolan’s Tenet (previously set for August 12).

At this time the X-Men horror movie  The New Mutants (now owned by Disney) still has a release date set for August 28, followed by A Quiet Place II scheduled for September 4th. At this point only a fool would think those movies will actually see the light of day on those dates.

On the bright side, when there’s a vaccine and we can hopefully go back to theaters there will be blockbusters releasing every other week for a year just to clear the backlog. That’s assuming all the theater chains don’t go bankrupt before then.