There are extras during the end credits of King Richard.

For the first two minutes of the credits film clips from the real people are mixed in. There’s nothing extra after you see “King Richard” on the screen.

The credits run for approximately 7 minutes. 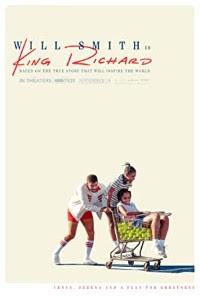 We have 4 Peetimes for King Richard. Learn more.

About The Peetimes
All of the Peetimes are pretty good, but I would recommend the third Peetime above the others.

The last Peetime has a nice short scene between the mothers and daughters that is inspirational. That’s why I made that one an emergency Peetime.

Plot (Spoilers)
A look at how tennis superstars Venus and Serena Williams became who they are after the coaching from their father Richard Williams.
Facebook
Twitter
Pinterest
LinkedIn