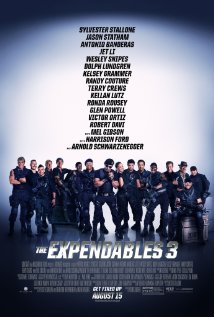 The plot for Ex3 is about as predictable as a grenade with the pin removed. In this case I’d say that’s a good thing. No one wants plot twists and surprises. Just make up an excuse to amp up the action and let it rip, right?


Speaking of which, the action was pretty good. The ending felt like the last level from a Call Of Duty like game. Personally I’d love to see a behind the scenes feature for this movie. It would probably be the most compelling reason to by the DVD when it comes out.

There wasn’t anything hilarious in the movie. The best they could achieve was a few chuckles here and there.

Wesley Snipes was a nice addition with just enough screen time to be fun without overdoing it.

Mel Gibson was perfect for the antagonist. As an aside: it doesn’t look like he’s aged in the past 20 years, and same could be said for Snipes.

The addition of the new young crew was entirely forgettable.

My recommendation would be to wait for the DVD. Mainly because it would be nice to rewind and watch some of the action scenes again. But if your looking for a fun, action packed, thrill ride then this isn’t a bad option. Then again, watching Guardians Of The Galaxy for a second time might be more enjoyable.