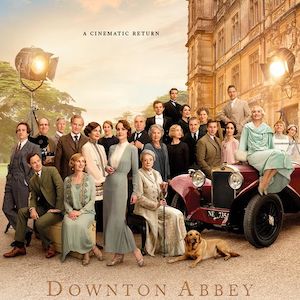 This week sees the American release of Downton Abbey 2: A New Era (read review of the first movie here) and I’ve been asked to write about it from a British point of view. This always makes me smile as, while the UK is only the 21st most populous country in the world, there’s still over sixty seven million of us. I do hesitate to speak for all of us as there are a lot of different opinions out there and I’m not completely British either; 37.5% Welsh, 25% Scots, 25% English, and 12.5% German. Close, but as it has been said before on many occasions, I’m not all there.

So, it appears that I do share a few of the attributes associated with being a Brit. Having said that I can’t begin to claim to represent every other British person. Remember, we a society riddled with class divisions and, at the same time, phobic about class divisions! We range from a very few people, the landed gentry, who are posher than the Queen all the way down to the lowest of the low. Sadly, it’s the Eton educated few that run things while managing to remain totally out of touch with the real world.

Vulgarity Is No Substitute For Wit

When I started writing the biographical articles, I was asked by Jill to include any honours that the people had been given; Dame Maggie Smith, Sir Ian McKellen, Toby Jones OBE, etc. as, apparently, Americans found that interesting. Then, when I was writing the Alan Rickman article, she asked how come he’d never been honoured. I looked into it and, like quite a few people, he had a certain set of principles which meant he had refused a knighthood.

Some people are quite happy with titles or letters they’ve earned, doctorates and other qualifications, but see no value in getting something just because their name was put on a list by someone in one of the Queen’s many offices. Others to have refused honours include David Bowie, Bill Nighy, Jim Broadbent, Malcolm McDowell, and Danny Boyle.

At My Age, One Must Ration One’s Excitement

I know it’s moot, but I like to think I’d refuse an honour if it was offered. Anyway…all this leads to me saying that I’ve done a couple of pieces from the perspective of the Eastern side of the Atlantic. I suppose what I should say is that they were the opinions of a Brit rather than British opinions.

So…what’s all this got to do with Downton Abbey: A New Era?

Perhaps it’s my way of saying that I’m not really the first choice for the producers to aim their advertising budget at. I have seen all the TV episodes and the first spin-off film. Having said that I wasn’t one of those people sitting waiting for the next episode to be screened or wondering if there would be a midnight showing when the film came out.

Nah…I bought the complete series because iTunes had a sale and I still haven’t been to see Downton Abbey: A New Era even though it came out over a fortnight ago over here. Seeing as it was created and written by Julian Alexander Kitchener-Fellowes, Baron Fellowes of West Stafford, DL, himself a product of the English public school system, my guess is that you’re meant to support unconditionally the goings on of the upstairs family and either smile indulgently or tut disapprovingly of what happens downstairs.

Sadly for the producers, that doesn’t sit well with me.  I wouldn’t say that I was a fervid WRP activist but I am a life long Labour supporter. Now I’m now what would be classed as middle class thanks to my education, employment, and empathy but I was brought up in a working class environment; I lived in a council tower block and went to the school on the estate that I lived.

There is a joke about the upper and lower classes being essentially the same; they both live on large, sprawling estates that ring with gunfire, drive cars without taxing them, and have more children than they really should. I came from the lower end of that spectrum and, trust me, it’s not the same at all.

Fortunately I don’t bear grudges. While my sympathies may lie with the wrong part of the house, I still quite enjoyed the Downton Saga. I’m not going to go much further than that. After all, I have it in my collection but I’ve never got around to watching it a second time. I probably will at some point and not really because of the stories being told.

Edith, You Are A Lady, Not Toad Of Toad Hall

If I do start a rewatch it’ll be for the cast. First and foremost is, of course, Maggie Smith who is always watchable. She is deliciously waspish as the Dowager Countess of Grantham. Michelle Dockery is another delight. Whether she is speaking with the cut glass accent of Lady Mary Crawley, the somewhat more rough and ready tones of Roz Pearson in The Gentlemen, or Death’s adopted granddaughter Susan in Hogfather, she’s always watchable.

I also have a lot of time for Dan Stevens.  Unfortunately Matthew Crawley was killed off at the end of Season 3! Still, Hugh Bonneville and Jim Carter are always good value for money. And, of course, there is Penelope Wilton. I fell in love with her back in the eighties when she played the much put upon Ann Bryce in Ever Decreasing Circles and I still have a soft spot for her to this day.