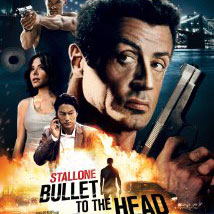 *Bullet to the Head* isn’t nearly as bad as I thought it would be. I know that’s not exactly high praise but I’ve been dreading this movie since I first saw the trailer – I typically do the action movies for RunPee. I’m not saying that it was outstanding by any means. The story is completely derivative and contains the classic elements of revenge, greed, good-cop/bad-cop, and misfit partnerships. I’m sure if I thought about it for a few seconds I could add a few more.

However, that doesn’t mean the movie has to suck. It all depends on the execution. That’s what pulls *Bullet to the Head* up out of the murky waters that so many movies of this genre fall into. It’s still covered in a thin layer of muck and grime but if you can look past that there’s a decent movie there.


Most of what makes the movie palatable is the acting. Stallone doesn’t have great acting range but as long as he stays in his comfort zone he can do okay. Sung Kang was a good choice for the sidekick role and the best part of the movie involves the relationship these two create.

And of course Christian Slater has a nice cameo playing himself. I mean his character’s name is different but it’s still Slater. Has he ever played a role other than himself? 🙂

There wasn’t anything raucously funny in the movie but definitely some good chuckles here and there – bonus that they didn’t put ALL of them in the trailer.

My biggest grip with the movie is how thin some of the scenes can be. The more I reflect on it the more I think things like: can a cop be that naive? are mercenaries that oblivious? and my favorite one is that bad guys pointing a gun can’t hear cars barreling down on them even in a parking garage. So take my advise: if you see this movie and you walk out thinking, “That was okay,”  then just leave it at that. Don’t pick at it because it will only get worse.