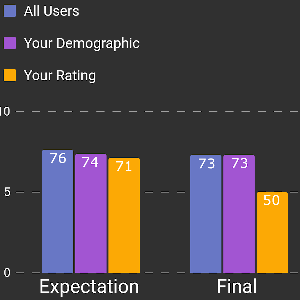 We put another year behind us so now it’s time to review the results of the Peeple’s Poll. In case you’re not familiar, the RunPee app has a unique poll that asks users what their expectation is for a movie before it starts, then when the movie ends users can add their final/post-movie rating.

Notice that Doctor Strange in the Multiverse of Madness fell below expectations by -0.4. That’s the first time since we launched the Peeple’s Poll that an MCU movie didn’t meet expectations.


Note: this isn’t all of the movies from 2022. I limited the query to movies that had at least 100 votes entered.

Surprise of the Year

If you had asked me before the year began what the most popular movie would be I wouldn’t have guessed Top Gun: Maverick in a million years. But wow, what a crowd-pleaser it was! In fact, going back to 2018 when the Peeple’s Poll was introduced, Top Gun: Maverick is the 3rd highest-rated movie we’ve ever had. That’s some rare air.

Movies That Beat Expectations The Most

I always find this an interesting bit of data: which movies performed best over expectations? I guess I’m going to have to put Where the Crawdads Sing on my watch list, and maybe The Woman King as well. I’m most surprised by Ambulance. That looked like a typical Bruckheimer movie. Well, I guess when you look at how low the expectation was before the movie it’s not all that surprising. An expectation of 67.5 is really, really low. What I really wonder is why would anyone go see a movie that they expect to be a D-grade movie? It’s great that it was better than expected, but still, it’s just a C-grade movie.