This has been the most financially successful year in RunPee history. I think we’re in good shape to be around for a long time to come. The biggest personal news is that Jill and I bought a house! RunPee HQ is now located in Swannanoa, North Carolina — just outside of Asheville. 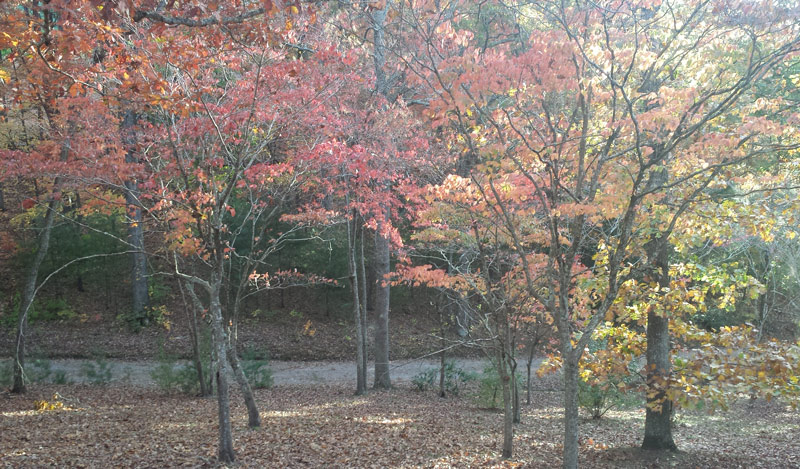 Here’s a picture from the office/bedroom window at RunPee headquarters.

Here are some statistics about this year’s movies.

RunPee Mom (Ginger) saw the most movies this year. Here’s a breakdown of movies by person.

This is the first year that Mom saw the most movies. Last year it was Sis, who is way down from last year. She’s going to have to work hard this year or I might need to find a new sister. 🙂 Shanee sees mostly the big blockbuster movies so that we’ll have Peetimes for the opening showing. This year she chipped in and added a handful of limited release movies.

Of the 161 movies 46 of them had extra scenes, during or after the end credits. That’s about 29% of the movies.

Our movie review grades were all over the map. I gave an A+ to 3 movies this year: The Equalizer,  The Theory of Everything, and The Imitation Game.  Six other movies got an A or A- grade: Lone Survivor, August: Osage County, Veronica Mars, X-Men: Days Of Future Past, Dawn Of The Planet Of The Apes, Birdman, Captain America The Winter Soldier, and Guardians Of The Galaxy. Five movies got a grade in the D range: Pompeii, Teenage Mutant Ninja Turtles,  The Maze Runner, Sex Tape, and Into the Storm.

Sis gave only one movie an A+ and that was The Fluffy Movie which really wasn’t a movie at all. She gave an A or A- to seven other movies: Neighbors, Tusk, Dumb And Dumber To,  Horrible Bosses 2,  Annie, The Gambler, and This Is Where I Leave You.  She gave four movies a grade in the D range: Devil,s Due, Oculus, Innocence, and Annabelle. She gave an F- to one movie: The Quiet Ones.

Sis and I were talking about movie grades last night and she commented that most of the movies that she’s looking forward to end up being horrible, and the movies that she dreads seeing end up really good. I think that’s very good evidence that she has poor taste in movies. 🙂

Mom gave just one movie, Jersey Boys, an A+.  Ten other movies got either an A or A-: Nebraska, The Fault In Our Stars, St. Vincent, Nightcrawler, Muppets Most Wanted,
How To Train Your Dragon 2, The Good Lie, The Judge, Kill The Messenger, and Big Hero 6.

Here are the most Popular movies on the RunPee app this past year.

Here’s a breakdown of RunPee app usage by country:

Notice that China isn’t in the top-10. I’m almost finished working on a new version of the RunPee app that is translated, Peetimes and all, into Chinese. I’ll be interested in seeing how that works out next year – fingers crossed.

The Samsung Galaxy S5 is the most popular Android phone among RunPee users, followed by the Galaxy S4, and S3 — looks like Samsung has the Android market cornered.

I just added the 3D voting feature to the RunPee app where users can suggest to others if the 3D version of a movie is worth seeing. It will be interesting to see what the best 3D movies are next year.