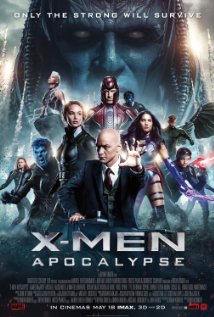 It’s always a struggle to rate and review movies like this. I’m going to take the easy way out and judge it against the other X-Men movies.

“Apocalypse” is way better than “The Last Stand”–universally believed to be the worst in the franchise. But, I don’t think it was quite as good as “First Class” or “Days of Future Past”–considered to stand together at the top of the list.


I’m going to put “Apocalypse” right below the top tier along with the the original X-Men and “United.”

There was a touch of humor in the movie, but nothing hilarious. Still, it’s WAY more humorous than the DC movies–not saying much–but not quite as humorous as most Marvel movies.

The action was good, but not spectacular. Maybe I’m just superheroed out, but it’s increasingly difficult for any action movie to impress me.

The acting and directing were both top notch. That leaves us with story and characters. So, here’s the problem: we all know they’re going to defeat the bad guy in the end. That means the only way we can really care is if there’s some sacrifice and there really wasn’t one. Certainly nothing that balances out their victory.

I think that’s the major problem with all superhero movies these days. The cast of characters just keeps growing. They really need to cull the teams and let some characters die off every now and then. That goes for the Avengers as well.

Basically, I liked it. It was an enjoyable two hours. But I didn’t love it.

Additionally, I saw the movie in 2D, so I can’t speak directly about how good it did, or didn’t look, in 3D but I didn’t see anything in the movie that made me wish to see it in 3D. The 3D ratings by RunPee users is currently at about 33%. That’s the lowest of any movie this year. Even lower than Gods of Egypt. (Kind of odd that two of the worst 3D ratings in the past year are for movies about Egyptian gods.)

chevron_left Is there anything extra during the end credits of Captain America: Civil War?
Movie Review – The Legend of Tarzan chevron_right