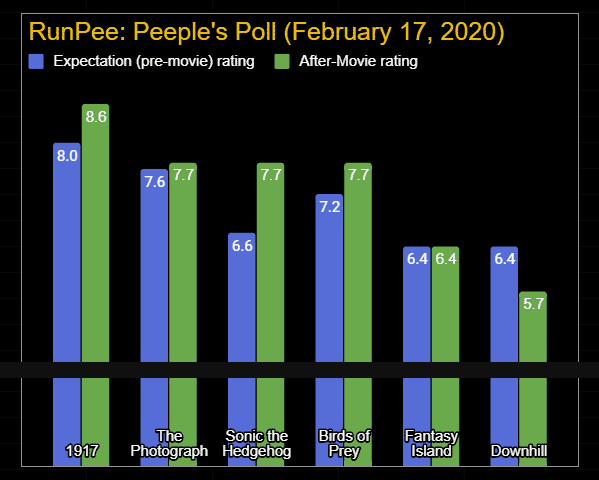 Over opening weekend Peeple gave Sonic the Hedgehog a respectable 7.7 After-movie rating in the Peeple’s Poll, but there’s no question that the movie vastly out performed its Expectation-rating, jumping up a full 1.1 points. There’s something to be said for setting the bar low. 🙂

The Photograph was pretty much what Peeple expected, improving only 0.1 points between Expectation-rating and After-movie rating.

Fantasy Island broke even at 6.4 for both ratings. And Downhill dropped considerably from the already low Expectation-rating of 6.4 down to an After-movie rating of 5.7. That rating will probably earn it spot in the bottom 10 movies of the year. Yikes! I think there’s something to be said for how the movie trailers present a movie as one genre when the movie doesn’t actually happen to be in that genre. RunPee Sis pointed out in her review that the trailers presented Downhill as a comedy, when in fact it really wasn’t.


The After-movie rating for Birds of Prey actually improved by +0.2 points this week. That might be a factor of the more hardcore fans went on opening weekend, who didn’t like it as much. But now that the more casual moviegoers are watching the movie they find it slightly more appealing. Just a theory. It reminds me that I need to break down some of the Peeple’s Poll results by time to see how ratings might change.