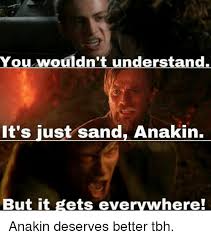 When I first heard this song about Star Wars and Sand, I played it a few times and realized it was way too catchy — impossible to tune out. But it’s so darn cute I don’t mind having the Force bouncing around in my skull for a spell.

The funny thing, in the wake of my post-bliss big-screen experience with Solo: A Star Wars Story, I decided to do an entire chronological re-watch of the entire Star Wars saga (excluding the animated movie and series for now). So two nights ago I saw Phantom Menace again (I’m more forgiving of it every time), then listened to the song. Huh. Really does fit in there.

Last night I watched Attack of the Clones, and then listened to the song a few more times, which really cracked me up. It’s so cringe-inducing listening to Anakin try to flirt with Padme by telling her his problem with sand getting everywhere. Not a romantic image. [pullquote]If your mind mentally replaces the original commonly used words in the prequels with SAND, it’s a bit of awesome.[/pullquote]


Tonite I’ll finish the prequels with Revenge of the Sith, and I expect the song to reach the highest heights of meme humor. Inserting the dread word SAND with almost any line by Anakin improves the experience immeasurably. We finally see why Anakin Force-choked his pregnant wife, fought Obi-Won, and turned the keeping of his soul over to the foul Emperor Palpatine (it was all because of Sand). Remember, in the words of young Ani, “Sand is very, very dangerous.”

And how does his son Luke beat him in Return of the Jedi? He had more Sand.

BTW, if you’re one of the Sandpeople on Tatooine, watch your back: Anakin will bust up your Sandy ways. Why? Because Sand is course, and rough, and irritating, and it gets everywhere. (Clearly, there’s no better reason to become a genocidal psychopath.) I think he only loved Padme for being soft and smooth. (Until she fell in love with the Sand.)

These lines are no more strange than the awkward ones Lucas gave us, so go with it. Where’s a sandworm when you need one?