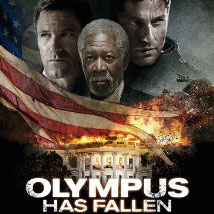 “Olympus has Fallen” is a lot like “Die Hard” in the White House. It is by no means as good but it’s still an entertaining and action packed movie. ( When I say “Die Hard” I’m talking about the original movie and not the latest release in the series. )

Movie critics are split on their reviews but the audience ratings are pretty solid in the “like it” category. The theater was nearly packed last night when I saw it. There were a few occasions during the movie that people cheered in response to the on screen action, and it got a smattering of applause at the very end. Best of all there were plenty of scenes that made the entire audience laugh.


Mike Banning – Gerard Butler – plays a likeable character that you want to root for. The supporting cast is rock solid. Of course Morgan Freeman is outstanding as the Speaker of the House. I wish the script had given Freeman more opportunity to impress us with his commanding presence but there were at least a few scenes where he got to shine. His talents weren’t wasted by any means.

This movie is R-rated for a reason. It’s bloody and violent and it’s not all just people getting shot with high caliber machine guns. There are scenes of women being beaten almost to the point of unconsciousness but it’s never a sexual attack. If that sort of thing bothers you then steer clear.

The story itself is scary plausible and I think that’s what makes the film so compelling. I’m sure a lot of experts are going to rush out and proclaim there are secret countermeasures to the type of attack used in this movie. However, I’m reminded of Tom Clancy’s book *Executive Orders* that used a terrorist attack involving a hijacked passenger plane to demolish the Capitol Building during the State of the Union address. That book came out 4 years before 9/11 and obviously no one took that scenario seriously enough to ensure that it couldn’t succeed. After seeing this movie I hope there are some serious questions being asked to make sure this scenario could be thwarted. Because I’m sure a lot of terrorists will see this movie and think, “You know, that’s worth a try.”