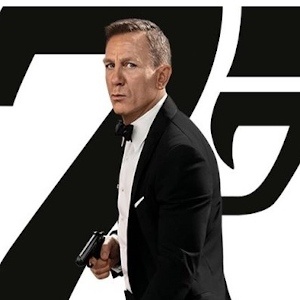 This weekend it’ll all be over.

No, I haven’t got an appointment with Dignitas and a one-way ticket to Switzerland. What I mean is that I have my tickets booked for Daniel Craig’s last outing as James Bond in No Time To Die and by this time next week I’ll have watched it, written the RunPee app entry, and reviewed the film. There are a few reasons why the impending release of this particular film has galvanized me into action, pounding away on the keyboard of my trusty MacBook Air with a substantial glass of J&B and ice at my elbow.


Incidentally, I’m open to considerations from any or all of the companies I mention in passing… just saying!

The first inklings of this article occurred to me when I realized that the tickets I’ve booked aren’t the first ones. For whatever reasons they may have, the James Bond films are always released in the UK a week or so before they are in the USA. As a result, Dan (the RunPee founder and CEO) has had me lined up to try and get Peetimes prepared as soon as possible and definitely in time for the lucrative American market. So I had tickets booked for No Time To Die way back in April 2020.  Like so many blockbusters there were showings starting at a minute past midnight. Sadly, or maybe thankfully, advancing years and a growing sense of self-awareness mean that I know that, while a midnight showing might have more atmosphere, I know that I wouldn’t be able to go to the cinema, get home at around three a.m., and resist the urge to sit up and write the Peetimes and a review straight away. Well… not a legible one.

Instead, both then and now, I booked tickets for the first-morning showing; also in both cases that is for ten in the morning. Now, something that you good people might not know is the sacrifices that have to be made in order to get your Peetimes to you. For instance, I usually awake around seven-thirty to be greeted by a cup of tea made for me by the current Mrs. Williams… I am British after all. For those interested, I take my tea like Jean-Luc Picard… Earl Grey, hot, black. Then around nine o’clock I fire up the Moka pot and start on the industrial quantities of coffee that keep me going throughout the day; lockdown has taught me how to make a reasonable substitute for my usual Starbucks wet lattes.

However, all that has to be put aside. No Time To Die is going to be the longest James Bond film yet. It is, apparently, one hundred and sixty-three minutes in length; very nearly two and three-quarter hours and I have to be there from the MGM lion to, hopefully, the card saying “James Bond will be back” or such like. Damn! I will need to be careful not to swallow when I’m brushing my teeth! I mean to say, there has never been an inter or post-credits scene in a Bond film and it’s highly unlikely that this one will buck the trend but I can’t take any chances. So, no grabbing my usual skinny, wet, venti latte with an extra shot on the way in. I might just have to take some Polos along to wet my whistle!

To be honest though, I don’t foresee any problems with all that. I’ve done it before and I’m really looking forward to No Time To Die. Why am I so keen? Well, it’s no secret that Daniel Craig is my favourite Bond; I think the great big Bond rewatch we undertook did little to hide my preferences. I like my Bonds to be rough, tough, and ruthless… like the books made him out to be. I’ve said before, I prefer the humour dialed down to, about, three and the action, like Nigel Tufnel’s amplifier, turned up to eleven. This iteration of the Bond franchise has done exactly that.

Then there has been the previously alluded to delays. Usually, films are put back because they might be better suited to one holiday or another. Occasionally something might happen in the real world that might mean, purely by coincidence, that to release a film of a particular topic would seem deeply insensitive or profiteering. No Time To Die was held up by something that could have been the subject of a Bond film… a worldwide pandemic originating from the Far East. Actually, wasn’t that Mission: Impossible 2? I was already looking forward to the release of No Time To Die when the lockdowns were announced. I remember going into my local cinema, The Light in New Brighton, after reading a news headline and talking to the manager. It was quite touching in retrospect.

So cinemas closed. Some closed down for good. I recall chatting with RunPee Dan about the different chains that may or may not be closing their doors and whether or not it would be a permanent move. We’d both mention names that the other didn’t recognise but it wasn’t a difficult Google search to realise that they were all part of the same parent company. This thing, this Plague 2.0, wasn’t going anywhere anytime soon. I’ve had many conversations about whether or not we’ll get over it and I am of the belief that, eventually, we will. All you need to do is look back a hundred years and see that we went through something very similar and only two years ago we knew nothing of it; it should be another century before something similar happens again. So No Time To Die about to open seems quite appropriate. It, hopefully, bookends the worst of the COVID-19 outbreak. I mean to say, I still wear a mask when I’m in public and I probably will do so for the foreseeable.  If anyone tries to shame me into taking it off I’ll just cough on them.

Another thing that has built up excitement is, well, the build-up to normality. Christopher Nolan tried to get things going last year by insisting Tenet got a cinematic release. I loved it and went to see it twice but, sadly, that wasn’t enough and we had more lockdowns. Don’t get me wrong, I’m a miserable old sod and was quite happy being in lockdown. Well… as long as Jilly keeps sending me indy films to review! I have managed to get to the cinema a bit more recently. It is a bit odd in that I submit a review and get asked why I haven’t done any Peetimes. Usually, the reply is that it’s been out on Netflix USA for months! This happened only this week with Gunpowder Milkshake!

Then there is all the kerfuffle surrounding the release of No Time To Die. I use Apple TV and a couple of weeks ago there was a free documentary about Daniel Craig’s tenure as Bond which I watched as soon as it popped up. Since then everyone has been posting “exclusives” about DC’s  ‘tearful farewell’ to being JB. I’m sorry but I saw that and what we were looking at was a guy retiring and saying goodbye to a close bunch of friends and colleagues. Ultimately though, that’s not the really big thing that got me about this Bond film…

What has really hooked me is that the Daniel Craig Bond era shows a complete story arc. In Casino Royale we saw Bond earning his Double ‘O’ status, in No Time To Die we see him put out to pasture with his trusty Walther PPK tucked away at the bottom of his sock drawer. This incarnation of Bond is the only one to show the full arc of the character; from inception to termination and replacement. In this series of films it has not just been a random collection of stories loosely cobbled together from a few novels. Daniel Craig is the only Bond to have progressed, chronologically, from induction to retirement.

Am I keen to see how this story ends? Trust me, ‘keen’ is woefully inadequate!

chevron_left Is there anything extra during the end credits of Dear Evan Hansen?
What we know/ What we want from Marvel’s Hawkeye chevron_right