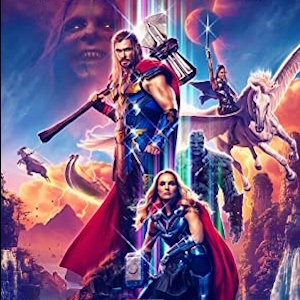 I found Thor: Love and Thunder to be better than expected, and I had high expectations going in. The story didn’t revert to the standard superhero tropes which makes it feel fresh. The only real knock I can give it is that in a few scenes, especially those involving the Guardians crew, the acting felt stiff. It was noticeable enough that I wondered if the bad acting was on purpose for some effect. If it was I don’t see why. But that’s a small flaw in an otherwise magnificent movie.

For those who loved the humor in Thor: Ragnorok you can rest easy knowing that Thor: Love and Thunder is every bit as funny. Best of all the humor feels natural and in character and doesn’t solely rely on the dialog. You’ll find yourself laughing at expressions and gestures as often as one-liners.


I don’t want to spoil it for you, so I’ll be purposely vague: one of the funniest characters in this movie was introduced in Avengers: Endgame but didn’t become a “character” until this movie. You’ll understand when you see it. Again, this is all due to great writing.

One of the most difficult tasks in writing a superhero story is creating a great villain. A villain isn’t just some super powerful character that the protagonists must battle against—If that’s all there were to it then DC movies wouldn’t suck so consistently. A great villain requires two critical components. Firstly, the villain’s goal needs to be clearly defined and expressed so that the audience understands their motivation. Sometimes stories convolute the villain to the point that it’s hard to tell exactly what they want. Or worse the villain is just a copy/paste of some trope and has no depth at all. Secondly, and most importantly, the villain’s motivations need to be framed in such a way that the audience can sympathize with them at least a little. It’s an added bonus when the protagonist can sympathize with the villain as well, even though they can’t allow the villain to succeed.

A great example is Killmonger in Black Panther. His methods are extreme but the audience can understand why he would go to those extremes. And in fact, his goal is achieved even though he is defeated. It’s a case of the villain’s actions changing the perspective of the hero.

Gorr’s goal and motivation are made clear right from the start: kill all of the gods. With the exception of Thor, the other gods are depicted as decadent, uncaring, narcissistic characters that aren’t worth saving.

Creating a great villain also requires an actor who can bring the performance to life. It should be no surprise at all that Christain Bale has once again shown that he is one of the greatest actors of all time. He’s barely recognizable as Gorr. His expressions of pain and anguish, from the opening scene until the end, add great sympathy to the character. I think it’s past time that awards be given for the best created and best-performed villains. If there were such a thing Gorr would be hard to beat this year or any year.

I’m very curious to see if this becomes every child’s favorite MCU movie. While watching the movie in the theater there were many young children, probably ages 5-12, sitting in front of me. They appeared to be engaged with the story. I expect that young children will really love this movie because it is simple to follow, and for other reasons that I won’t spoil for you.

I found it interesting that the blood of the gods is golden. We discover that right from the opening scene, but later there’s a battle where golden blood is splattered in buckets. If instead, their blood was red it would look like an R-rated Tarantino movie. The golden blood reduces the visceral impact and gives it more of a cartoonish effect.

Maybe the god’s blood is golden for more reasons than only so the movie can keep a relatively tame PG-13. The writer/director Taika Waititi is unsurprisingly a progressive-minded guy from New Zealand. The gods in this story could easily be replaced with politicians in our world. And when you think of politicians and gold it shouldn’t take much imagination to see where Waititi was going with this.

Or, maybe I’m reading too much into this. What do you think? Comment below.

There are certain tropes that many superhero movies repeatedly rely on. Thor: Love & Thunder does a great job of twisting those tropes in fresh ways. The action may be cartoonish but the themes and consequences are decidedly real-world: suffering, loss, and sacrifice. The characters display depth as they reveal hidden emotions and fears.

About The Peetimes: The good news is that every scene of this movie is enjoyable. The bad news is that it makes finding good Peetimes nearly impossible. I think the 3rd Peetime is the best of the bunch. And the 1st Peetime is good if you need an early break.

There are extra scenes during, or after, the end credits of Thor: Love and Thunder. (What we mean by Anything Extra.)

Plot
Thor enlists the help of Valkyrie, Korg and ex-girlfriend Jane Foster to fight Gorr the God Butcher, who intends to make the gods extinct.

chevron_left Is there anything extra during the end credits of Thor: Love and Thunder?
RunPee Weekly Newsletter #122 (July 13th, 2022) chevron_right