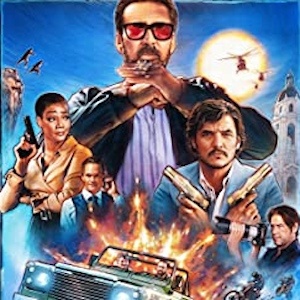 Where to start? This was such a fun movie from so many angles. Near the end of the movie I realized I had been smiling for who knows how long because everything was just so much fun. And it just makes me want to do a Nick Cage marathon and rewatch the classics: Raising Arizona, Con Air, The Rock, Face Off, and my personal favorite, National Treasure. Better yet, if you haven’t seen this movie yet then let me tell you you’ll enjoy it just that much more if you do a rewatch of your favorite Nick Cage movies before seeing this.

Well duh. It was perfect. And not just Nick Cage. This is easily my favorite Pedro Pascal role. I’ll be honest, I’ve not been impressed at all with Pedro Pascal’s roles to date. I’m going to say it, “I hated Mandalorian and my family had to force me to watch the last two episodes of the first season. After that I said, “I’m done. I don’t care how good this might get in the future, this is just garbage.” And OMG, Wonder Woman 1984 was cringe-worthy bad.

Obviously, having an A-list actor playing themselves in a movie is going to be meta. But it gets so much better than just that. I just saw this movie and I could sit down and watch it again tonight. In fact, I think I’ll have to take RunPee Mom to see this movie soon. Now I have an excuse to go see it again.

I hope this is enough to get people talking about National Treasure III. Please, Disney, make this happen.

About The Peetimes: I have three Peetimes, but I’m not crazy about any of them. Every scene of this movie is meaningful on some level. We had to pick something to use as Peetimes and I think what we have makes the best of a bad situation.

There are no extra scenes during, or after, the end credits of The Unbearable Weight of Massive Talent.

Plot
The fictionalized version of Nick Cage must accept a $1 million offer to attend the birthday of a dangerous super fan Javi Gutierrez. Things take a wildly unexpected turn when Nick Cage is recruited by a CIA operative Vivian and forced to live up to his own legend, channeling his most iconic and beloved on-screen characters in order to save himself and his loved ones.