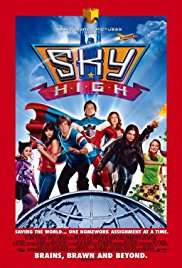 I honestly forgot just how cute, and how much fun this 2005 film is. And I had the movie conflated in my head with Mean Girls, thinking Tina Fey was the gym teacher. Well, she’s not — instead, we have the equally awesome Bruce Campbell as the gym teacher. And in case you forgot, Sky High itself is a floating castle of a high school, specifically for young Superheroes-in-training. And also, sadly, a school for Sidekicks (AKA, “hero support”).

On your first day of school you get slotted as a Hero or Sidekick. And the teens we follow are those whose powers are so bizarre (melting into a puddle of slime) or minor (shape shifting into a guinea pig) that they are siloed as Sidekicks. And the main character – the son of the Earth’s most powerful superheroes – has no powers at all.

Sounds fun? It really is. [pullquote]The “evil plot” is a forgettable MacGuffin, so you can feel free to ignore everything to do with it, and get on with the good times one can imagine if an 80’s John Hughes film was steeped in a tea of Marvel goodness. [/pullquote]There’s the smart-ass tormentors of the Sidekicks, the pretty mean girls, the snide cafeteria hijinks, the bad boy with a heart of gold, childhood crushes, school tournaments (Save The Citizen!), and kids who really just wants to fit in. Even if fitting in means he simply glows if he tries really hard — and only if it’s really dark enough.


Things to notice: the soundtrack that takes you way back. Funky posters on the walls, silly jokes and throwaway lines in background scenes, sly school loudspeaker announcements that you barely notice, a self-referential picture on a  pinball machine…it’s all there for the joy of it. Also, you’ve got Principal Linda Carter giving kids detention, shaking her head at the children and saying she’s not Wonder Woman, ya know.

Does the powerless kid get his powers? What do you think? Does the gawky girl get the boy? C’mon. From Steve Stronghold (Kurt Russel at his overbearing man-child best) as The Commander, to Ron Wilson, Bus Driver (who I want to give a hug for making lemonade out of lemons), this is a whole heap of fun and a good message. Sky High is a keeper for the download list, a nice background movie ranking next to The Breakfast Club, Ferris Bueller, and…yeah, Mean Girls.