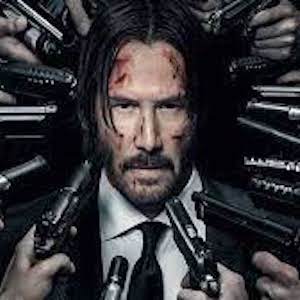 John Wick returns! Personally, I can’t wait. If they keep up the standard of the first three I’d be happy to see this franchise running as long as the James Bond one!

Who is John Wick?

John Wick is (was) a retired hit man. He was an exceptionally good one. Liam Neeson thought he had a particular set of skills, but he was nothing compared to John Wick. John was happily retired and living with his wife. Unfortunately, she took ill and died. Just before she passed away she arranged for him to get a puppy to comfort him. Some dodgy Russian gangsters came around and took his car and killed the puppy. Then John Wick came out of retirement…

Chad Stahelski returns as director. Shay Hatten was a co-writer of John Wick 3: Parabellum and returns with Michael Finch.

Keanu Reeves is back in the title role. Despite what I said earlier about this franchise going on as long as the Bond one, I can’t imagine anyone other than Keanu as the lead. Other returnees include Laurence Fishburne (The Bowery King), Ian McShane (Winston), and Lance Reddick (Charon).

Some newcomers that I’m looking forward to seeing are Donnie Yen, Bill Skarsgård, and Clancy Brown all in, as yet, unknown roles.

Characters, So Far, In John Wick 4

The Bowery King is the head of a modern-day version of Sherlock Holmes’ Baker Street Irregulars. Winston and Charon are, again, the manager and concierge, respectively, of the New York Continental Hotel; neutral ground for all the professional assassins passing through in search of a bed for the night. And, as I said earlier, there are still unknown roles.

John Wick was a retired hitman. He was dragged back into the profession in the first film. The second and third films saw him getting a price on his head, which just got bigger. As a result, all the people he used to call colleagues now see him as a source of income.

John Wick 5 was, originally, going to be shot back to back with John Wick 4 (how very Matrix 2 and 3 of him!) but, well, COVID, etc. So there is a fifth outing in the pipeline. Keanu Reeves said he will carry on making sequels as long as the films are successful. So get out there and buy your tickets!