There are extras during the end credits of *Hotel Transylvania: Transformania*.

The credits run for approximately 10 minutes. The first three minutes continue the story and gives us a nice tie-in to the quite good animated Hotel Translyvania TV show.

The very last second showcases the kind of vulgar humor Adam Sandler is known for. It’s a blink and you’ll miss it scene at the very, very end. (Hmmm, *the end*. I get the joke now.)

Note: We don’t normally add *Extras details to the opening studio logos*, but here 3 of the 4 logos were changed to reflect the Hotel Translyvania theme. Worth a smile or two for HT fans. 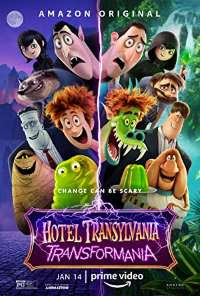 We have 3 Peetimes for Hotel Transylvania: Transformania. Learn more.

About The Peetimes
Here are 3 decent Peetimes with nothing major going on. I recommend the 3rd one after the first-hour mark.

There’s much better humor sprinkled throughout the rest of the film, with better dialog and set pieces. You’ll be safe with these Peetimes.

Plot
When Van Helsing’s mysterious invention, the “Monsterfication Ray”, goes haywire, Drac and his monster pals are all transformed into humans, and Johnny becomes a monster. In their new mismatched bodies, Drac, stripped of his powers, and an exuberant Johnny, loving life as a monster, must team up and race across the globe to find a cure before it’s too late and before they drive each other crazy. With help from Mavis and the hilariously human Drac Pack, the heat is on to find a way to switch themselves back before their transformations become permanent.

chevron_left Is there anything extra during the end credits of Scream?
Movie Review – Hotel Transylvania 4: Transformania chevron_right