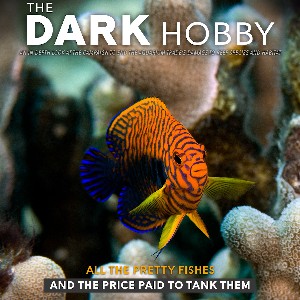 I’ve been a keeper of fish in the past. I’ve kept goldfish in bowls and ponds, and I’ve kept tropical fish in increasingly large tanks as my Aspergerish tendencies meant that I got deeper and deeper into the hobby. I never got as far as keeping marine tropical fish but, were it not for a house move, I may well have got into that too. I’m now rather glad that I didn’t as The Dark Hobby shows that the way the fish are collected and distributed is a little short of torturous.

Most of The Dark Hobby is set in Hawaii and follows the drawn-out legal battles between the people who want to take care of the fish, and those who don’t care about them and just want to make money from catching them to sell on to the aquarium trade.


I say “drawn out” not because it is dull or boring but because it goes back and forth so many times. I know I usually say that documentaries are exempt from spoiler worries because, if you want to, you can just Google the events and find out the outcome but, in this case, I’m not going to because it’s not a widely known topic, and I really don’t want to spoil this film for anyone getting the chance to see it.

I’m Going To Get You, Little Fishy

The Dark Hobby starts with the first verse of “We Fish” by Herman Melville, but then cuts to Robert “Snorkel Bob” Wintner talking about how the area around the Hawaiian coast where he lives is known as the Gold Coast due to the proliferation of Yellow Tangs which are, practically, hoovered up by fish dealers. Apparently, all you need to be a fish dealer around Hawaii is $50 and a pulse… I’d add a lack of consideration for other life forms, both piscine and human.

I say “piscine and human” because there is footage of fish collectors deliberately putting other people’s lives at risk simply because they were trying to photograph what they were doing. It reminds me of the old “if what you’re doing is legal, why are you worried, and if it isn’t, why are you doing it” argument. There are many testaments as to the intelligence and awareness of fish, which just makes the later scenes of how the caught fish are treated all the more traumatic.

For instance, Cleaner Wrasse fish have been put through basic intelligence tests and, while they may not be Mensa candidates, they do show self-recognition and awareness.

Sign the petition to keep fish at home on the reef.

The methods used to collect fish vary around the world. In the Philippines dynamite or cyanide is a popular catch method.

And, yes, it is what it sounds like; a dynamite blasting cap is thrown in the water, or a diver goes to the reef with a vial of cyanide and squirts it around the reef. The end result is ultimately the same… fish start floating around and are scooped up.  After a while they can tell which were stunned and which are dead; the stunned ones get bagged up and shipped off, while the dead ones are just thrown back in the sea.

Similarly, there are 100 million sharks killed every year simply for the Chinese shark fin soup market. While there may be arguments about how many millions of chickens are killed, there may be a different reaction if the chickens just had their wings and legs cut off while they were still alive and then thrown back into a field.

The aquarium fish are also being tortured; so they can be brought up to the surface quickly they have hypodermic needles stuck into their swim bladders to release the air, they have any spines on their fins cut off to protect the plastic bags, and they are also starved so they don’t foul the water in the plastic bags.

All in all, it does make you think twice about keeping fish.