RunPee news coverage has been frankly phenomenal. I am grateful and appreciative for all the props, and would like to say thank you to everyone who called RunPee genius. And brilliant. 🙂

Check out the video review of the RunPee iPhone app by TapCritic – 4:28 minutes long. He shows you how to use the RunPee application in each step. I couldn’t have done it better. 🙂

VanityFair magazine had an interview with Rashida Jones who confessed that RunPee was her favorite app! 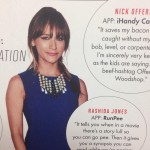 Entrepreneur Magazine – When Nature Calls RunPee.com lets you, well, you know, during movies.

This article does a great job of recounting how the idea of RunPee.com evolved from a desperate need to pee to an international media sensation.

Take A Bathroom Break Like James Bond With The RunPee App

Yes, you to can be James Bond cool with the iPhone app. I love it! 🙂

Reviews of the iPhone RunPee Application

Reviews of the Android RunPee Application

News and Blog Posts about RunPee

There are way too many blog/news posts for me to list. I’ll probably never even see a tenth of them. But here is a list of a few I’ve read:

YummyMummyClub.ca – Amber Mac tells a nice story about how RunPee helped make watching Avatar a more enjoyable experience. It is 2 hours and 40 minutes long. Most people are going to need RunPee.com for such a long movie.

AntHill was nice enough to write about RunPee.com and even mention the mobile version of the site – something most people overlook. Thanks guys.

NYDailyNews.com has some nice works to say about RunPee: an app our female friends fawn over . . . Very cool. RunPee is fawnable! Maybe soon someone will write that women swoon over RunPee. 🙂

MightyBrandBlog.com has a wonderful interview with me about how we manage social media here at RunPee.com.

How to de-squirm a movie. Only HowStuffWorks.com could come up with that angle. I love it. 🙂

RunPee.com got NETTED by the Webbys: The Best User-Generated Strategic Guide To Optimal Movie Pee-Break Moments Ever.

RunPee Radio Interviews (with no podcasts)

I do radio interviews pretty much every day – sometimes three a day! I know I’ve forgotten to write most of these down, but I do appreciate every single one of these stations and their hosts for helping spread the good word about RunPee:

We enjoy finding RunPee reviews posted in languages other than English. Here are a few we’ve found, with some translated by Google. By late Fall 2009 we plan to have our web redesign readable in all languages around the world for our wonderful international RunPee fans.

chevron_left Where did this genius idea come from?
FAQ chevron_right